Jessica Simpson Using Baby To Get Back With Nick Lachey 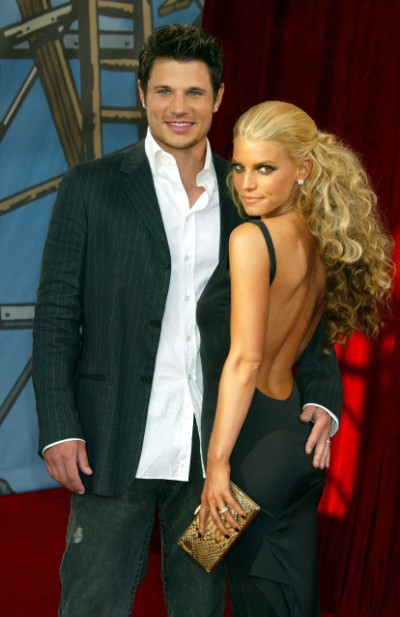 Jessica Simpson hopes she’ll be able to go over for play dates at ex-husband Nick Lachey’s house very soon. Perhaps there will be a Lachey-Simpson marriage (that lasts) after all – between their children, that is. Because Jessica is all about using baby Maxwell Drew to hang out with her newlywed again.

The National Enquirer reports that Jessica can’t wait to trade potty training stories with Nick and his current wife, Vanessa Minnillo. “Being a new mom has made Jessica giddy with love and wanting to share that feeling with the whole world,” a close friend told the Enquirer. “She and Nick have had their ups and downs since their divorce, and Jessica and Vanessa have sniped at each other for years. But for Jessica, that’s all water under the bridge. She’d love for her daughter and Nick’s child to grow up together. She’s even called him and Vanessa to tell them so.”

Vanessa and Nick announced their pregnancy in early March. They sent Jessica a gift basket after she defied all gestation records and delivered her baby girl a few weeks ago. And the goodwill has gone to Jessica’s genius IQ brain. “Vanessa laughs at the thought of forming a mommy’s club with Jessica and becoming her BFF,” revealed the source. “She says Jessica is best appreciated from a distance. I think Jess read a little too much into that gift basket Nick and Vanessa sent.”

I’m having major nostalgic memories right now. I stared at current pics of Jessica Simpson FOREVER looking for the right one to post, but instead picked one of Jessica and Nick in their heyday. Too beautiful, right? Look how amazing she looks. And he’s OBSESSED with her. Every other picture features his hand on her ass. It’s hot. Sure, you could tell me this was when she was starving herself to fit into daisy dukes for the Dukes of Hazard disaster, but I don’t care. She was never more beautiful than when she was with Nick. Does that mean we should all run back to our first loves? Hells no. It’s just an observation on youth.

Jessica’s career and waistline may have changed but she’s still the same clueless blond. I have no doubt that she thinks little Maxi can hang with the Lacheys but I doubt Vanessa will let it happen. Vanessa’s always seemed pretty down to earth and there’s no way she’s going to sign off on that arrangement, not because she’s worried about anything happening, but because Jessica’s annoyingly candid. I’m sure she doesn’t want to sit around talking Diaper Genies and nipple discomfort with that woman. I totally agree.