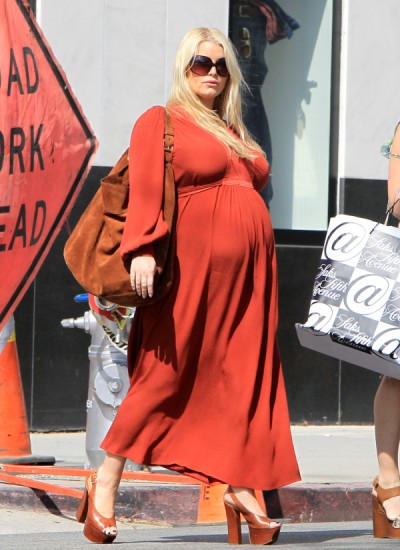 Jessica Simpson read off of the Weight Watchers press release yesterday and confirmed she’s working with the weight loss giant to drop the 80 pounds she gained while pregnant with baby, Maxwell Drew.

She tweeted, “So excited to be part of the Weight Watchers family” and later added on her Facebook page, “The cool thing about the program is that it focuses on healthy habits for the long-term (and I can still indulge in my guilty pleasures every now and then, too). I have actually gotten a group of friends together who are going to be doing it with me.”

So she used two forms of social media and she sounded like she copy and pasted a blurb from the Weight Watchers website. She’s earning that $4 million already, isn’t she?

Us Weekly reports the new mom is just itching to get back into the gym but is still recovering from the birth of 4 weeks ago. “As soon as Jessica heals from the C-section, she is extremely determined to get back in the gym and work out,” a source told the magazine. “She wants to show the world and is excited to do it.”

I have no doubt Jessica wants to shut the mouths of snarky biotches such as myself. I wasn’t killing Jessica with kindness when she flaunted her muumuu-wearing ass all over Hollywood. But I like a good weight loss story just as much as the next guy – more even. Apparently she’s already lost 20 pounds so she’s on her way, though I’m sure that’s just liquid gooey weight she lost when the baby came out. I thought chicks with C-sections couldn’t work out for like 6 weeks at least. Can anyone out there let me know? I hear coming back from that is the worst. So Jessica’s got a long road ahead of her. But she has the whole world, and more importantly, me watching, along with personal trainers, chefs, state-of-the-art gyms and, oh ya, a $4 million incentive. Must be nice!