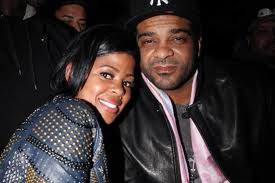 The show is going to be called, ‘Jim and the Family Jones.’  They are getting this show on their own because they could not get along with Mona Scott-Young the executive producer of the show, ‘Love and Hip Hop.’  I saw that show and in the reunion Chrissy wanted to blame everything on editing, (sure).  She blamed all of this on Ms. Mona, who I might add has an impeccable reputation in the entertainment business.

I personally like an episode in the series where Chrissy tried to physically attack Yandy Smith, Jim’s ex-manager, in a club (I had friends there that night it was as bad as it seemed, “loved it!!”)  Yeah Chrissy that’s all due to EDITING.  Do you see my point!  Chrissy no one cares if you wear $5,000 shoes, you’re still a hood rat.

As far as Jim Jones goes, he says he doesn’t like reality TV but to be honest he was not too known out there as a rapper, not really known.  So don’t spit in the well because now look who wants to drink out of it you.

VH1 has offered them a reported $200,000 a piece for each season the show runs.  They plan on focusing on Chrissy’s efforts to try to get pregnant and their upcoming wedding, (Oh God! Another wedding for TV).  I’m confused about the baby spin on the show because I thought she was already sporting a baby bump.  Well Chicadoodles, we’ll all see what happens.