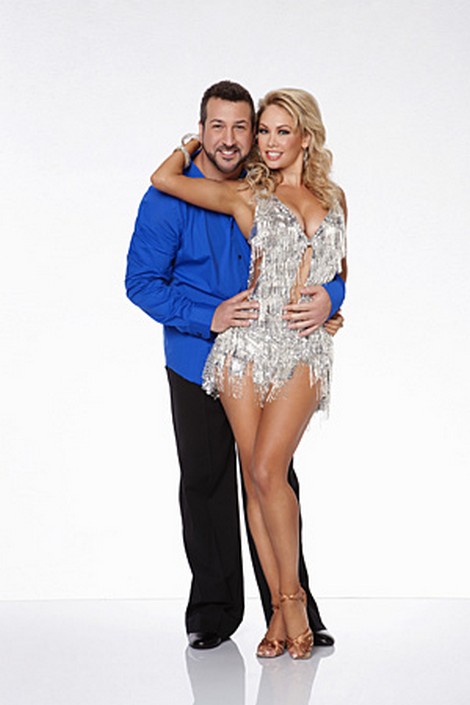 Joey Fatone danced the Cha-Cha-Cha to “P.Y.T.” by Michael Jackson for his first performance of Dancing With The Stars All-Stars 2012 Season 15.  All 13 couples will hit the stage performing either the Cha-Cha-Cha or the Foxtrot to impress the judges and viewers at home, hoping they’re not the first couple sent home.   We recapped the tonight’s show for you and if you want to see how all the couples did go HERE!

Joey Fatone and professional dancer Kym Johnson dancing the Cha Cha Cha.  Kym had this to say about Joey this season, “Joey is wearing his Cuban heels.  I make him wear them all the time. His ankles and leg muscles are sore because he’s wearing them. He’s always complaining about it.  He was a bit lazy season four,” Johnson said. “He didn’t wear them all the time and I let him get away with it, so it’s my fault. So now I’m cracking the whip a little more. I’m not taking any of his nonsense.”

Judges Comments: Len:  “You are like a boomerang – I loved watching you dance, you are full of energy, high performance.  You posture was a bit dogy- but overal fantastic.” Bruno: “You always bring it and live it large.  you did all this wonderful Michael Jackson moves.  Your posture has to change for the Cha Cha Cha” Carrie Ann: “Joey you are one of my favorite showman.  That is the way to start off the all star season.”

Watch the video below and let us know what you think? Do you think Joey did enough to win the Mirror Ball Trophy? Sound out in the comments below!