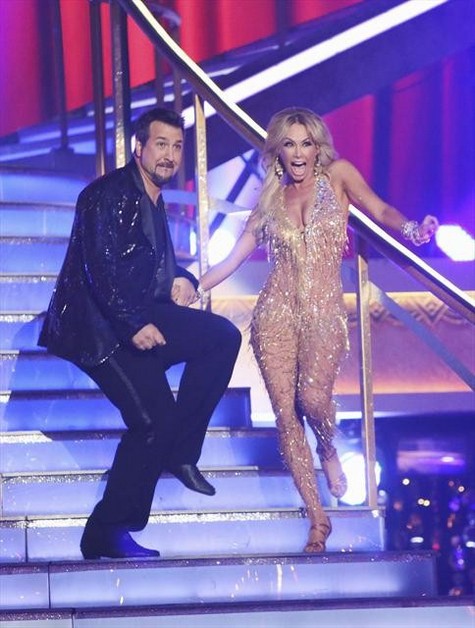 Joey Fatone danced the Quickstep for his performance tonight on Dancing With The Stars All-Stars 2012 Season 15.  All 12 couples hit the stage performing either the Jive or the Quickstep to impress the judges and viewers at home, hoping they’re not the first couple sent home.   We recapped the tonight’s show for you and if you want to see how all the couples did go HERE!

Joey Fatone and professional dancer Kym Johnson dancing the Quickstep.  Kym had this to say about their dance this week, “I love this Quickstep. Because we got the music a little before, so we had a head start on it. I love the routine.” Joey said, “The song’s great. It’s kind of really cool because younger kids will get it … but basically it’s a song from an artist but another artist re-did it, and it’s more of a big band kind of thing.”

Judges Comments:  Len:  “Poor posture, bad footwork.. but I really enjoyed it. If you can’t dance much, come out and entertain us and that is what you did.”  Bruno: “You do entertainment and we love you for it. Yes, technically it could have been better, there were some mistakes.”  Carrie Ann: “We are looking for technique, but I love fantastic performances and that was what we say, except for a few mistakes.”

Watch the video below and let us know what you think? Do you think Joey did enough to win the Mirror Ball Trophy? Sound out in the comments below!