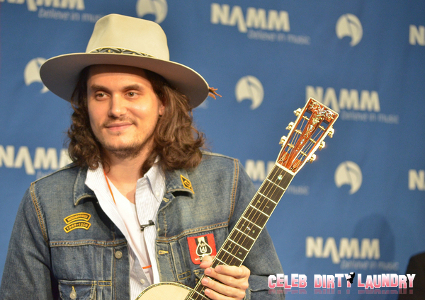 Karma’s a bitch for musician and kiss-and-tell proponent John Mayer.  34-year-old Mayer has just announced via his blog that he is cancelling his upcoming tour to promote his new album and will be taking an “indefinite break from live performing” because of a vocal chord injury.

The seven-time Grammy winner had a Granulona removed from his vocal chords in late October but Mayer discovered it had grown back after a visit to his throat doctor on Tuesday.

The tour to promote his upcoming album “Born and Raised” was set to begin on April 9th and would have marked his first return to the stage in two years.

“Nothing feels worse than having to break the stage down before the performance, and I mean nothing,” Mayer told fans in the online statement Friday, adding, “I love this band you were going to hear, I love the guys and girls I work with, and the only thing that stops me from devolving into a puddle of tears is knowing that it’s a long life, and the greatest gift in the world is being able to create music no matter what the circumstances.”

Mayer says he will have to undergo a second surgery and spend a lot of time resting his voice but will continue to write music during his hiatus because he feels “vibrant as a writer” right now. Never one to deny himself a pat on the back, is he?

I can’t help but see this as a little ironic after Mayer’s vocal chords got him into a lot of trouble after a 2010 Playboy interview when he candidly discussed his sexual opinion of black women and his relationships with Jennifer Anniston and Jessica Simpson, who he called sexual napalm: “That girl is like crack cocaine to me,” Mayer said. “Sexually it was crazy. That’s all I’ll say. It was like napalm, sexual napalm. Did you ever say, ‘I want to quit my life and just f—ing snort you? If you charged me $10,000 to f–k you, I would start selling all my s–t just to keep f—ing you.”

While it’s been a while since we’ve heard from Mayer, nuggets like the one above remind us that it’s probably in John’s best interest to stay quiet—for more reasons than the growth on his vocal chords.