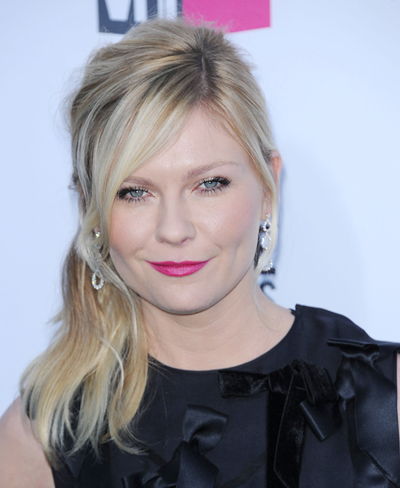 After kissing and telling about so many celebrity starlets, you’d think that the women of Hollywood would know to stay away from John Mayer by now, but evidently it seems that the 34-year-old professional singer-slash-amateur womanizer is still reeling them in!

Reportedly, Kirsten Dunst doesn’t care that John’s long list of exes would wrap around the block and includes everyone from Taylor Swift to Jessica Simpson (who he called “sexual napalm”) to Jennifer Aniston; she wants to join the club and date him!

According to Intouch Magazine, the 29-year-old actress, who has been linked to Garrett Hedlund as of late, was at a bar in LA recently and was overheard telling her friends that she’d like to record a duet with the “Your Body Is A Wonderland” singer. (Who even knew that Kirsten could sing?)

“His voice is so sexy! And his lips are totally kissable,” she supposedly told her confidantes.

Granted, Kirsten has quite a number of notches on her belt as well, including Jake Gyllenhaal and Orlando Bloom, so if she wants to hook up with John, perhaps she knows what she’s be getting into. (And, if not, she’d only need to read Mr. Mayer’s infamous Playboy interview to find out exactly what he’s all about when it comes to women.) Related: John Mayer Loses Sexy Ex Cell Phone Videos