John Mayer using Katy Perry as Bait to get Closer to Rihanna! 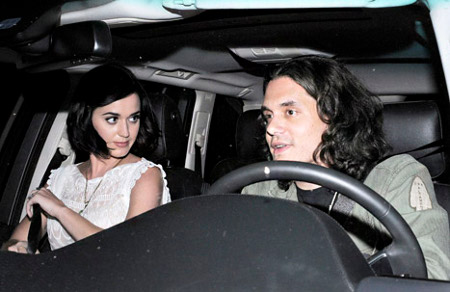 Katy Perry might think she found a good guy in singer John Mayer, but, little does Perry know, Mayer has other motives for hooking up with her: Rihanna. John Mayer has a long list of women that he has had under his belt and Perry isn’t much different from all the others. But this time it’s going to get personal when Perry finds out Mayer’s first choice is actually Rihanna. Mayer has wanted to get with Rihanna for a while now, and what better way for a scumbag to do it than by luring her out with her best friend on his arm?

Mayer first had his sights on Rihanna back in 2009 at an industry event and since then he’s wanted to get to know her even more. “They really hit it off,” one source explained. “John was smitten. He tried to lure her back to his place on several different occasions, but Rihanna just laughed him off, saying she wasn’t his type. That only made him want her more.”

Rihanna has her reasons to be suspicious. During his Playboy interview in 2010, John Mayer stated that he wasn’t attracted to women of different races. I find that highly unlikely. Mayer comes off to me as a man who’s willing to stick it in whomever’s available at the moment. “That was all bull because he’s a dyed in the wool horn dog and ALL girls turn him on,” the source continued.

Now that the Katy Perry Russell Brand divorce has been finalized in July, she has made it clear that she is back on the prowl. If I were Perry, I would be on the lookout for signs of his douchebagness. Just wait. It’ll show itself soon. We all know the reputation Mayer has so it really should come as no surprise to Perry, but the girl will get what she wants, even if she doesn’t realize how Mayer is secretly aching for her longtime bff. Would you date someone that wants your friend, too? Do you think Katy Perry dating John Mayer is a good thing?