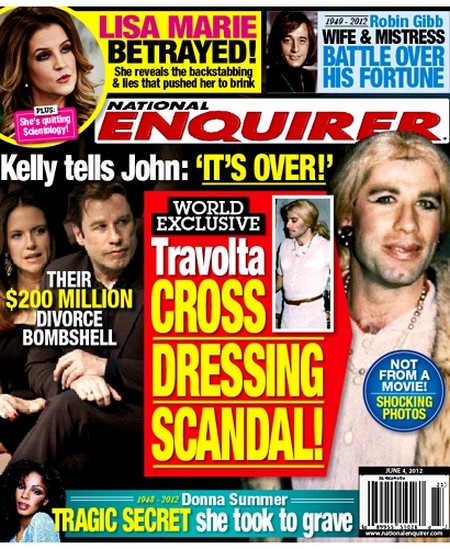 The current issue of National Enquirer features the bombshell story ‘John Travolta’s Cross-Dressing Scandal.’  The magazine has the world exclusive shocking story that John Travolta is a cross-dresser. National Enquirer even has the shocking photos to substantiate their story and claims they are not from a movie. Yikes, check out the photo above, with John as a blond, he is not a very attractive women :-) However in the photos John is very thin, the photos look like they might be from when he was younger.

John has dressed as a women before, when he played middle-aged mom Edna Turnblad in a remake of John Waters’ classic Hairspray.  When he took the role it was said that the powers that be over at the Scientology community were less than pleased about John playing a cross-dresser.  I wonder how they will feel about these new photos.

John has been in the news lately with several masseuses claiming he sexually abused them and filing lawsuits.  John has denied all the allegations but after this new information, the magazine claims his wife Kelly Preston has kicked him to the curb and told him to get out.  They have all the details inside their $200 million divorce bombshell.  Kelly cannot take another public humiliation.

All these scandals involving John seem like one big snowball that’s going to keep rolling for awhile. John just might lose his wife and his career, not to mention his dignity, when it’s all said and done.

Also included in this week’s magazine they claim that Robin Gibbs who lost his battle with liver and colon cancer this week’s lover and his wife Dwina are battling over his fortune.  Add to all this they have the tragic secret that Donna Summer took to her grave.

To find out all these details and more, pick up the current issue of National Enquirer hitting newsstands tomorrow!