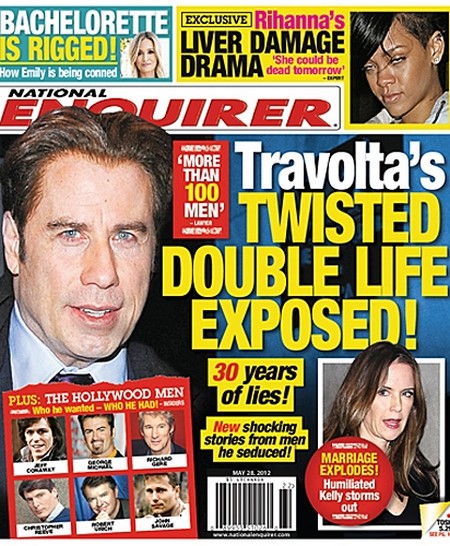 John Travolta’s marriage explodes and as his distraught humiliated wife, Kelly Preston, storms out!  Enough’s enough for Kelly. After 21 years of marriage, these fresh sexual assault allegations against her husband might be enough to force Kelly’s hand and call it quits.  It seems that the list of men John had or desired includes Richard Gere and Jeff Conway.

The current issue of the National Enquirer reports on the cover that it only took Kelly 30 years of stories about her husband’s alleged lascivious lifestyle to come to her senses. It kind of reminds me of the old tootsie roll commercial “How many licks does it take to get to the center of a tootsie pop?” Well, this is “How many fondlings does it take to get to the heart of Kelly’s shame and disgust?”  Apparently a lot, but she might just be there.

The Travolta camp celebrated a coup earlier this week when it seemingly discredited accuser John Doe #1 for listing the wrong date on his lawsuit. At the time he said Travolta was fondling his scrotum in Beverly Hills, the actor had picture proof he was in New York City. In response, John Doe #1 parted ways with his attorney, Okorie Okorocha. Okorocha is still representing John Doe #2 from Atlanta for another sexual assault suit. That suit will supposedly not go to trial but will be held behind closed doors by a private judge in mediation – I hear $$$$.

But don’t cry for John Doe #1. Reports are that the California masseur hired civil right hotshot and penal famewhore, Gloria Allred. She told RadarOnline, “I represent John Doe #1. Mr. Doe’s lawsuit was dismissed without prejudice which means that he is still legally entitled to file another lawsuit against John Travolta if he chooses. We are in the process of conferring with him regarding the next steps, which he may wish to take. Our client and our firm has no further comment at this time.”

This feels like one big snowball that’s going to keep rolling for awhile. Travolta might lose his wife and his career, not to mention his dignity, when it’s all said and done. And that got me thinking…if he had to choose one to salvage, which would it be? Travolta is nothing if not proud of his career and his legacy as a 70s icon and 90s comeback kid with Pulp Fiction. But if he can’t contain these lawsuits, he’ll forever be known as sexual predator John Travolta instead of Oscar Nominee John Travolta.

Even Quentin Tarantino wouldn’t be able to spin a comeback from that. But he could go contrite and publicly apologize to the public, his fans, and his family. He might be able to keep his wife but lose his life’s work.

Or John could deny, deny, deny and live with his secrets without Kelly who is apparently done with them. Which way do you think he’ll go?

It’s a hard call. John might have only wanted the masseurs to massage his back (and play with their penises) but their stories have broken his marriage. I think he should get used to sitting at Mel Gibson’s table.