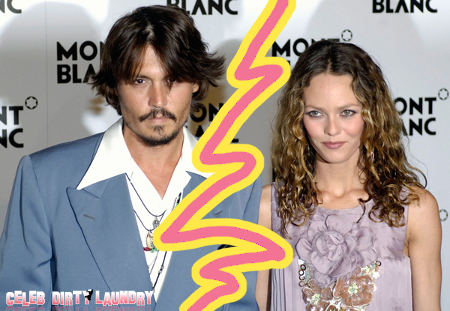 Actor Johnny Depp and longtime partner Vanessa Paradis have decided to end their 14-year relationship forever. This goodhearted and amicable split came about after the two slowly began drifting apart from one another; after moving to L.A. from France, the change of scenery apparently created a hiccup in the partnership, which never quite healed. All year Depp has been seen strutting his stuff on the red carpets without Vanessa by his side. This split was a longtime coming, and now we can all rest in peace knowing the officiality of this severance.

Depp and Paradis, who never married, have two children together, Lily-Rose (13) and Jack (9). I always hate to see celeb splits, simply because of all the drama that inevitably seems to fall upon the kids. As his publicist said, the split was “amicable,” so hopefully they’ll maintain a close enough relationship for their kids’ sake.

In a 2010 interview with Marie Claire UK, Paradis said: “I could make an endless list of all the things I admire about him. We understand that, if we want our relationship to continue, we must give each other space, allow each other to go off on our own, and trust each other. Not everyone is lucky enough to be given space and trust.”

Apparently that “endless list” of admirable qualities she saw in Depp stopped growing — either that or she 1) accidentally misplaced it or 2) decided to burn it in a hate-filled frenzy. It seems to me as if all this space and trust, the very things she thought would keep them together, ended up, ultimately, pulling them apart.

Paradis also said that marriage is “something [she] can really do without.” Apparently, it’s not just marriage that she can live without. Bon Voyage, VannDepp! This Hollywood split gets 1 out of 4 of my tears. UGH. *Sigh* Too predictable.