Johnny Depp And Vanessa Paradis Still Together… For Now

BY Jeanne Adams on May 24, 2012 | Comments: one comment
Related : Johnny Depp, Vanessa Paradis 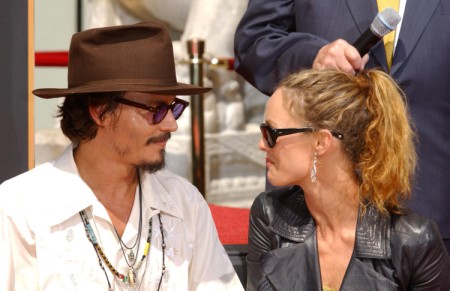 After months of endless rumors that Johnny Depp and partner Vanessa Paradis were finally ready to call it quits, another source is coming out saying the couple is still together – but not exactly going strong.

A“well-placed” source tells E! News the couple of 14 years is “trying to work it out.” That’s great to hear but not exactly comforting.

Surprisingly Depp actually spoke out and denied the rumblings a few weeks ago on the Dark Shadows red carpet. He told a UK Sun reporter, “The rumors are not true. They are absolutely not true. No matter what I say about this, people believe the opposite. I can’t say enough about it not being over.”

It’s Depp’s speaking out that has the source so confident in the couple’s recent stability. “For the first time in a long time, he is talking about her. They both want to make it work.”

Depp and Paradis obviously want to make it work for their two children, Lily-Rose, 12, and Jack, 10. But Depp has seemed to be on a midlife crisis bender of late, drinking and passing out in odd places again like he’s trying to relive his Kate Moss glory days. He was also recently linked to his Rum Diary co-star, Amber Heard.

But a source tells E! News that lately Depp has been “very calm and focused” while filming his role as sidekick Tonto in the new Lone Ranger flick in New Mexico. He has been returning most weekends to be with Paradis and the kids in L.A.

Hopefully it works out for the couple. Do you think they have a chance or are they just delaying the inevitable?