Johnny Depp Says He Is Still With Vanessa Paradis But Is It True? 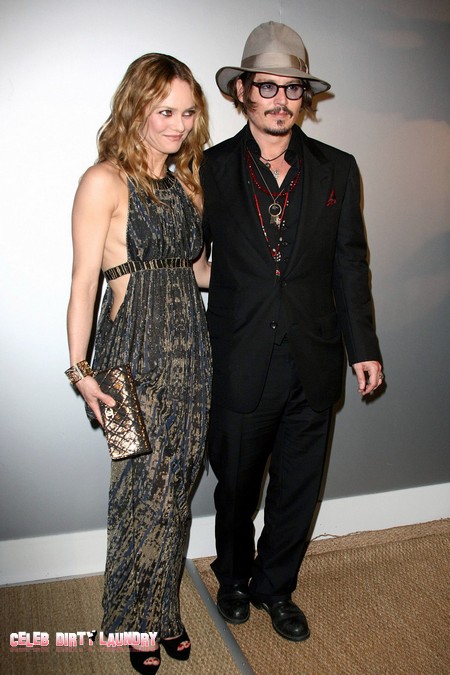 Finally Johnny Depp is speaking out against those pesky split rumors about his relationship with Vanessa Paradis and on the red carpet of all places!  But do we believe him?

‘The rumors are not true. They are absolutely not true,’ the actor said at the premiere of his new Tim Burton flick, Dark Shadows, according to U.K.’s Sun.

This runs contrary to media reports that Depp and partner of 14 years, Vanessa, have been living separately for months and it was only a matter of time before they released a statement confirming it. But Depp was described as frustrated as he reiterated his denial. “No matter what I say about this, people believe the opposite. I can’t say enough about it not being over.”

Paradis issued her own denial back in January when she told a French chat show, “People say we are buying houses in the middle of nowhere, or that we have fifty two houses in France. And that is along with saying we split up every winter and get married every summer, and that I’m on my twelfth pregnancy. All that is not too serious, but this latest one is a rumor which could cause a lot of harm to my family and my children.”

It’s important to point out that Paradis, who usually walks red carpets with Depp, was not at the premier. Perhaps she didn’t want to be around Depp’s co-star, Eva Green? It was rumored that Green and Depp were hooking up on set, something neither actor has commented on.   Of course we also heard that Johnny slept with Angelina Jolie and this was rumored to have come from Vanessa herself!

Sources have identified Depp in some sort of mid-life crisis over the past year. There were pictures of him falling over while signing autographs in Los Angeles, apparently drunk. Then, last November it was reported he’d turned up at a New York nightclub acting like a bachelor with seven women in tow (no, they were not dwarves), and a Vanity Fair interview described how he insisted on going gambling at the Ritz casino in London but was found asleep in one of the hotel’s toilets. This sounds more like Captain Jack Sparrow’s antics – not the loveable, family man Johnny Depp as softened into.

The couple has two kids together, Lily-Rose and Jack, so maybe they did take a break for awhile but are trying to work it out. Despite recent blockbuster success, Depp is not known for being the most conventional guy on the block. But I’ve never took him for a liar either. I get it if he doesn’t say anything but why deny if it’s true? So I think the couple is really trying to make it work – for now at least.