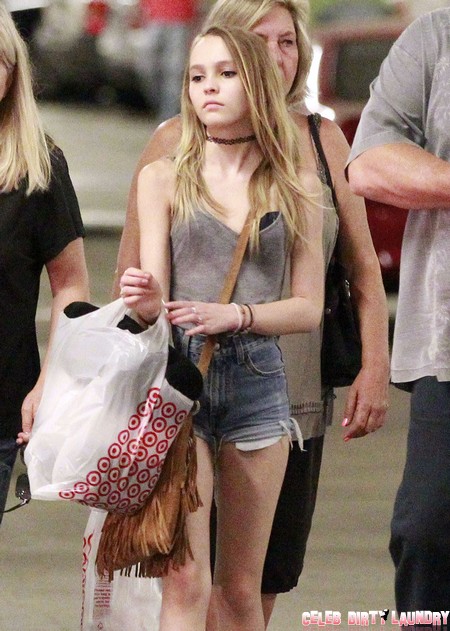 Johnny Depp always wanted his family kept far away from the moral swamp that is Hollywood. He lived with Vanessa Paradis and their two children, Lily-Rose Depp, 13, and Jack Depp, 10, quietly and contentedly in the South of France for years.  But some say that Vanessa wanted much more and so insisted on moving with Johnny and the kids to Los Angeles.  In any case, whether it was at Vanessa’s urging or not, the move was a big mistake in terms of the happiness and cohesion of the Depp-Paradis family.

Not only has Johnny boy gone off the rails with his drinking and sleeping around, thereby destroying his relationship with Vanessa, but Lily-Rose is turning into a real wild child!  Apparently Lily-Rose is well on her way to becoming the next Kracken – yes, the once innocent and adorable Lily-Rose is metamorphosing into some scary hybrid of Bobbi Kristina and Lindsay Lohan.  God forbid!

The National Enquirer exposes the story: The “Pirates of the Caribbean” star, 49, wants to prevent the precocious teen from pursuing a Hollywood ca­reer, sources say, but singer/actress Vanessa, 39, doesn’t agree.

“Johnny still thinks of Lily-Rose as the little 7-year-old that he almost lost to E. coli poisoning, and he’s deeply concerned that Vanessa is letting her run wild,” said an insider.

“He doesn’t want Lily-Rose, or her brother Jack, thinking about anything but school until they’re 18. But Van­essa is letting Lily-Rose explore her creative side by allowing her to wear funky outfits, and she’s schlepping her to acting auditions.

“Vanessa and Johnny have been having screaming matches over Lily-Rose. It’s gotten ugly.”

Depp and Vanessa hooked up in 1998, but never married, and raised Lily-Rose and Jack, 10, at their home in the South of France. Since their split, the actor has been living in Los Angeles while Vanessa is looking for a home in Malibu.

As The ENQUIRER has reported, the French beauty is waging a full-scale palimony battle for her share of Depp’s $350 million fortune, and she’s banned one of his latest girlfriends, bisexual actress Amber Heard, from going near their children.

“He’s so worried about Lily-Rose that he’s even turned to his good pals Brad Pitt and Angelina Jolie for advice.

“Johnny knows that if his little girl gets involved in the Hollywood scene, she’s going to grow up a lot faster. And he doesn’t want to see her turn into the next Lindsay Lohan.”

Evidence shows when it comes to the propensity to engage in wild and potentially self-destructive behavior, being a teenager is the single biggest risk factor.  Living in an environment where anything goes and money flows just increases the danger.  Having a father with serious substance abuse issues who can’t stop sleeping around doesn’t help much either.  And when that father is Johnny Depp, one of the most famous Hollywood stars of all time, we have to assume that Lily-Rose is at serious risk.

Are we being too harsh?  Are we being ‘alarmist?’ Well if we look at what happens to many of the children of Hollywood’s elite then the answer is ‘no.’ In this case – despite Johnny’s supposed concern for Lily-Rose, we’d have to say that the example he sets is so bad that he will bear the lion’s share of the blame if things go south for his daughter.  What do you think?

Lily-Rose and some of her servants out and about: