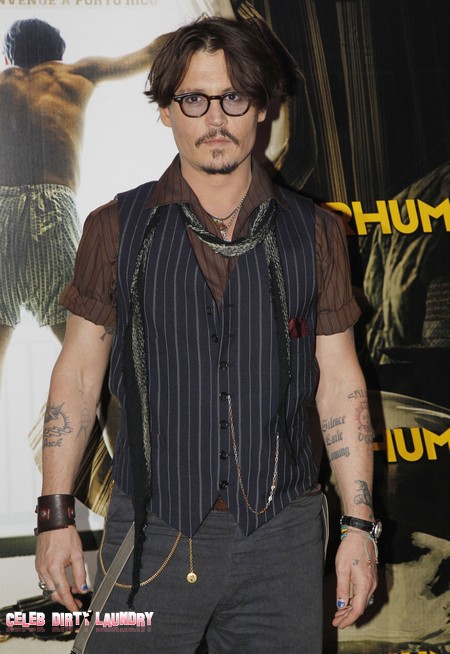 Johnny Depp has hired shock-rocker Marilyn Manson to play at his son’s 10th birthday party.  John “Jack” Christopher Depp III is the son of Johnny and Vanessa Paradis and if the kid turns out to be a bit weird we can always blame the birthday party.  Marilyn Manson is pretty far out there – at least according to typical family standards.  In fact Marilyn has the reputation of being a detrimental influence on children – encouraging drug taking and other activities that we can’t even mention here…

Johnny has previously said he took inspiration from Marilyn for his character Willy Wonka in the 2005 film ‘Charlie and the Chocolate Factory.’  Although the pair are friends, Marilyn’s tracks such as ‘Cake and Sodomy’ and ‘I Don’t Like the Drugs (But The Drugs Like Me)’ don’t exactly make him a child friendly performer.

Marilyn said in reference to an album Johnny worked on with him:   “Johnny’s son Jack – whose birthday I’m gonna be performing at – was in the room and he actually played on the song too. It’s pretty cool.”

Johnny stepped out of his usual role as A-list actor to hook up with Marilyn his new album, ‘Born Villain.’  Johnny provided guitar and drums for a cover of Carly Simon’s 1972 hit ‘You’re So Vain’, which shock rocker Marilyn felt would be a particularly “ironic” track for them to take on.

MORE: Johnny Depp Is Just Too Much Man For Vanessa Paradis

He told MTV:   “We did a cover version together of a song which we thought was ironic for each other.  He played drums and lead guitar, and I played guitar and sang.  It’s a bonus track on my record and the video will probably be us looking at each other like a mirror.”

Johnny has leant his musical skills to other musicians, such as Babybird and Oasis, appearing on Fade In-Out’ from their 1997 album ‘Be Here Now.’  Johnny also joined Alice Cooper on stage at London’s 100 club when he performed last year.

Is it time for Johnny to think about replacing Marilyn with Barney?  Would you hire Marilyn Manson for a kid’s party?  Let us know in the comments below.