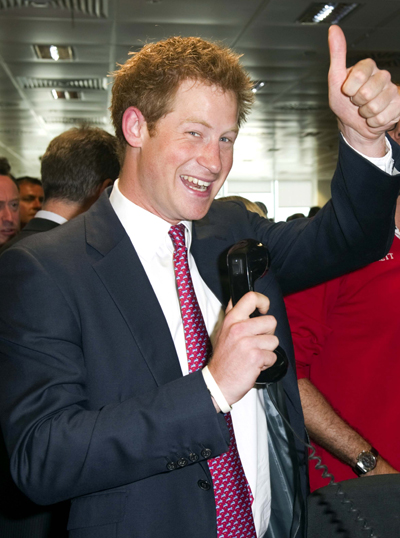 Maybe it’s because he’s not destined for such a serious role as the future King of England like Prince William is, but Prince Harry has always been our favorite British royal, mostly due to his fun-loving antics. Can you imagine Prince William or Kate Middleton, Duchess of Cambridge exiting a nightclub in the trunk of a car? We didn’t think so.

The 27-year-old prince’s latest stunt was on display in Rio de Janeiro, Brazil this week, as he completed a mile-long fun run, wearing a mask of Prince William over his face.

According to People, Harry, who was visiting the South American country as part of a royal tour to highlight and promote British interests there, spotted the mask of his more uptight, older brother on another runner and thought it would be funny if he wore it himself. (You can see the hilarious photo of William’s cardboard face combined with Prince Harry’s ginger hair here.)

While in town, the young royal also attended a party, complete with a samba band, and poked fun at Prince William further by remarking:

“Everything about Rio makes you want to dance…I’m just glad my brother isn’t here, because he might do it, and that would not be cool.“

Nothing like some brotherly ribbing to keep things interesting, right Harry? Related: Prince Harry Parties And Dances His Butt Off In Belize