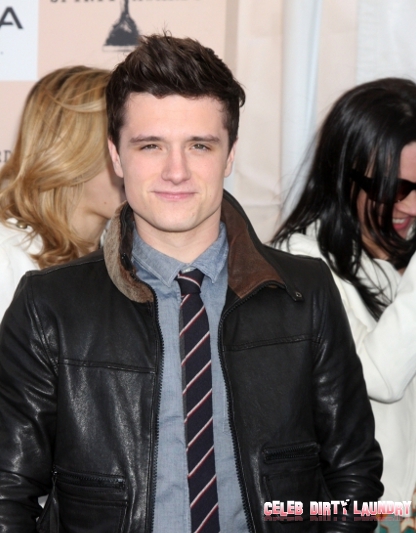 Josh Hutcherson says fans can look forward to at least one kissing scene and, while commenting on the scene, he said that Jennifer Lawrence — our lovely Katniss Everdeen — is a fantastic kisser. Good with a bow and kissing? Well, we think J-Hutch should finally just put his arm around J-Law and marry her already!

Josh, in talking with CelebBuzz, says that he’s really excited for fans to see the awesome cave scene, which spans an entire 7 minutes and stays true to the book. Like with the Harry Potter films, I think this is one thing we can expect with this movie: consistency. While many of the scenes may not resonate as strongly with viewers or convey the same emotional power on screen  as Suzanne Collins’s beautiful words do on the page, it sounds like we can expect a movie that — for the most part — stays true to the books. Hallelujah! All we have to say is that it better or fans ain’t gonna be too happy!

When asked if J-Law was a good kisser, he responded with an enthusiastic, “Oh, yeah. Twelve out of ten. One hundred percent.” Yep, they should start dating. And then Kristen Stewart and Robert Pattinson can invite them over for dinner parties.

When asked about what other scenes he’s looking forward for fans to see, he mentions (SPOILERS) that the moment when all the tributes rush into the Cornucopia at the beginning of the Games is beautifully done and uber intense. He also says that the Tracker Jacker scenes are fantastic as well.

Check out the video of the interview below:

Make sure to check out some new-ish pics of the characters! CLICK HERE TO VIEW.

If you, like me, just can’t get enough Hunger Games news, make sure to check out our special HUNGER GAMES section. We’re always on the lookout for awesome new stuff, so if you’re a fan make sure to visit us often to get all the latest News from Panem!

The movie is ALMOST here, folks. We just have to wait a little bit longer. Until then . . .