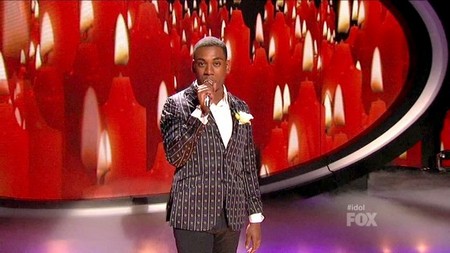 ROUND 2 – Joshua Ledet performed  “It’s A Man’s Man’s World”  by James Brown tonight on American Idol the Top 4 California Dreamin’ night.  Did you miss tonight’s episode?  If you did we watched it and we recapped it here for you.  On last week’s show Skylar Laine was sent home.   If you missed the show you can read our full and detailed recap here.  If you missed any of the performances from last week you can see them here.

The contestants remaining in the competition are: Phillip Phillips; Jessica Sanchez;  Joshua Ledet and Hollie Cavanagh.

Joshua Ledet is really excited to be singing “It’s A Man’s Man’s Man’s World” by James Brown. Jimmy thinks Joshua is incredible and is going to kill this song.

Judges Comment: Randy: “You delivered us tonight, this is the greatest song for you and the best performance ever on any singing competition. If you want to know what singing is all about, just listen to Joshua Ledet”. Jennifer: “I thought we had seen everything you had to give, but we hadn’t”. Steven: “Neither man nor women have sang that good with such compassion ever on this show, I have never heard anything like that in my life”.