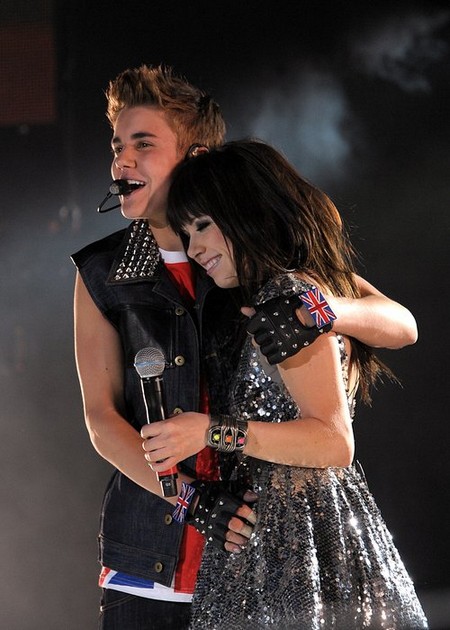 Oh, oh…Selena Gomez better watch out! It’s been reported that the one-hit maker Carly Rae Jepsen and Justin Bieber are getting a litte too close for comfort. Bieber, 18, and Jepsen, 26, were seen getting very close and personal during a concert together in Saskatoon, Canada. How a 26 year-old songstress can be seriously considering dating a man-child is beyond me, but maybe the fact that he made her the popstar that she is today has something to do with it. Last December by tweeting to his 29 million followers how much he loved the song Call Me Maybe, it became an instant hit overnight.

Concert goers report that during the duet song Beautiful, Bieber held Jepsen’s hand tenderly as he stared deep into her eyes. That little bit of contact must have affected Bieber as well, since at the end of the song, when they were coming down the steps, he missed one and fell back, most certainly about to eat it up in front of thousands of fans. Fortunately for him, the older and more experienced Jepsen, caught the back of his shirt and saved him from falling on his ass. That would have been funny and made the headlines, but it wouldn’t have been as car-wreck gross as the vomiting video that was shown earlier.

Jepsen will be on the world tour with Bieber, until January. The couple will be getting closer and closer, performing nearly every night. I’m sure Selena Gomez will not be happy to see that, especially seeing that Jepsen is an older woman and is adept at the art of seduction. What do you think; does Gomez have anything to worry about?