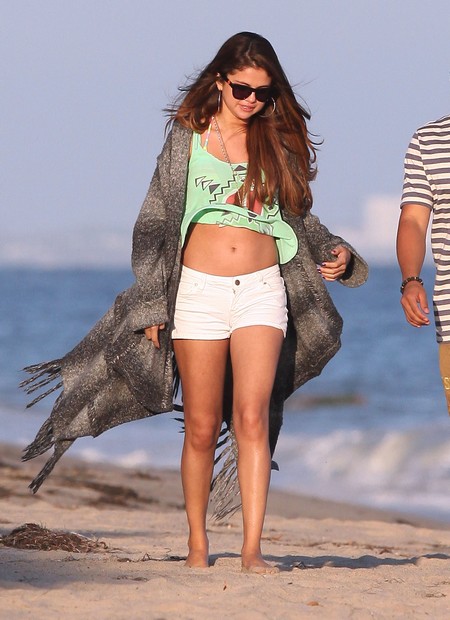 Selena Gomez is so terrified she’ll lose Justin Bieber that she’s weeping in a wishing well. No, not really. She’s just doing what every teenage girl does – crying in the arms of her BFF’s.

There have been reports circulating the internet that Justin Bieber and Selena Gomez have ended their teenage dream several times the past few months, but kick started it again like Lindsay Lohan’s career. Selena allegedly met her friends at a restaurant in California and she was crying in a milkshake about Justin leaving her and seeing other girls.

A source at the restaurant revealed to Life & Style, “Selena and some girlfriends came in for lunch, and she was in a serious mood. She swept her hair forward to cover her face and kept really quiet.”

Sounds like a teen romantic comedy to us, riddled with plot holes and girls coming down stairs in prom dresses and guys playing football and nerdy girls writing in journals covered in hearts and Zac Efron cut-outs.

Another eavesdropping patron, who had nothing better to do than to stalk Selena, said, “I overheard them talking about how she and Justin had broken up. She was being consoled by her friends.”

Bitch, why don’t you just focus on your soggy pancakes instead of listening in on Selena’s heart break?

Someone close to Selena (cut that bitch Selena!) also went to the media and said, “She was in tears for 72 hours, saying Justin was over the relationship and wanted to be single.”

Selena was allegedly found near a dumpster on the fourth day, dried up and open mouthed like that teenage girl at the beginning of The Ring who met a demonic girl in a wishing well on a television set, much like what happens to you when you end up watching Carly Rae Jepsen’s music video.

According to Star Magazine, print edition, July 23 2012, “Justin’s too clingy and delusional and [Selena Gomez] wants to date someone more mature.”

Yes, we know Justin is delusional. He believes he is Michael Jackson and does Thriller in his sleep.

Let Celeb Dirty Laundry give you some advice Selena. Stop crying like a woman who just had a nervous breakdown and do something about the awkward situation! Don’t bitch over milkshakes and fries with your fake BFF’s, because naughty patrons are always listening in…

What do you think readers? Should Selena move on? Is Biebs delusional? Let us know in the comments below.