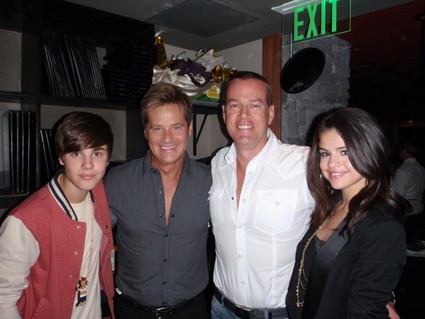 Justin Bieber and Selena Gomez have been accused of smooching and boob grabbing in public by a jerk who rode in an elevator with the world’s cutest couple Saturday night. Do we really believe that Justin and Selena would smooch and that Justin would grab Selena’s breast with other people around? No way!! Justin is far too considerate of Selena and way too much of a gentleman to be getting up to all that with some punk-ass snoop watching.

The fool who is spreading this crap is named Richard Reid who posted a picture of himself along with Justin and Selena and another man (a pal of his from Australia) on Twitter.

He claims on Twitter in the caption to the pic:  ‘Justin Biber and Selena Gomez let us ride down with them in the secret celeb elevator in Mastros Steakhouse.’

Also on Twitter Mr. Reid has a fascinating conversation with fans of Justin and Selena. It is here that the snake ‘reveals’ the PDA he claims to have witnessed:

Richard – ‘I am sitting one table away from Justin Bieber and Selena Gomez at Mastros restaurant. Crazy!!!’

Richard – ‘yo baby. I’m at dinner sitting with an Aussie pal who doesn’t believe I know you but knows I adore u.’

Richard – ‘so happy! He looks sooo young!! (presumably referring to the Biebs, not his own boyfriend)

Richard – ‘PICTURE: Justin Biber and Selena Gomez let us ride down with them in the secret celeb elevator in Mastros Steakhouse.’

Richard – ‘Richo and the Biebs!’ (Picture is here on Twitter)

Richard – ‘goregous and quite sophisticated. She was wearing leather hot pants and black platform pumps!’

Fan – ‘was there any smooching going on?’

Richard – ‘He didn’t grab it and squeeze it, he more cupped it and fondled it. it was very quick’

Richard – ‘With his left hand he cup her boob, but then acted all “like whaaat?”‘

Richard – ‘After Justin put her hand on her breast, Selena Gasped in a laughing way and said HEY!!!’

One fan was right on when he Tweeted Richard:  ‘At’s sad that after they befriended you and even took a picture you are now setting Selena up for more hate from Beliebers.’

You just can’t trust people these days – Justin and Selena were nice and friendly to this prick and he abuses the privilege? What do you think about this? Do you believe Richard’s story? Let us know in the comments below.