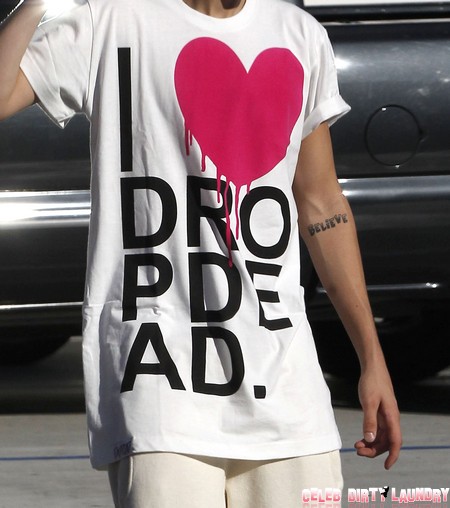 Justin Bieber fans across the U.S. had quite the scare today as news quickly spread of a supposed cancer diagnosis for the Prince of Pop.  A screenshot of a tweet presumably coming from Entertainment tonight stating “Pop star Justin Bieber was diagnosed with cancer earlier this morning.  Bieber fans are shaving their heads to show their support” included a reply from the Biebs himself, but both were quickly deleted.   Adding more suspicion was a website that quickly launched entitled “Bald for Bieber”.  The site included the statement “Recently, information regarding our loving artist Justin Bieber has been leaked online.  Justin has cancer.  At his request, it was kept hidden with help from his agent, although some devious people figured out this secret and leaked it over the Internet.  We would like to embrace this!  SUPPORT BIEBER IN HIS STRUGGLE – #BALDFORBIEBER!”

I’m on the fence about this one.  Surely if Justin was diagnosed with Cancer he would have quickly sent out a statement.  He’s been so passionate about cancer research and making it a point to spend time with cancer stricken fans that I would think he would use his celebrity status as a platform to help expand research for a cure.  Maybe some a-hole just thought it would be a funny prank to pull over on everyone.  I may not be Justin’s biggest fan, but I am definitely a supporter of his endeavors.  And this latest stunt is not anywhere near funny.

Justin, I call on you to clear up this mess.  You may not have made it, but like it or not you are a part of it.  Assure your fans that you are either okay or that you have in fact been keeping this diagnosis under wraps.  And all of you Justin Bieber fans…can you make sure the rumors are true before shaving your head or throwing yourself off a balcony?  Readers, let me know what you think.  Does the Biebs have cancer or are we the ones being Punk’d? 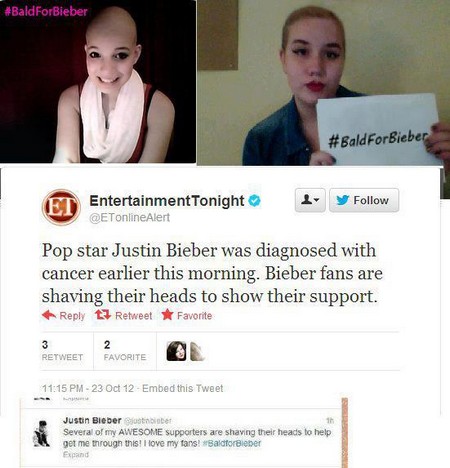