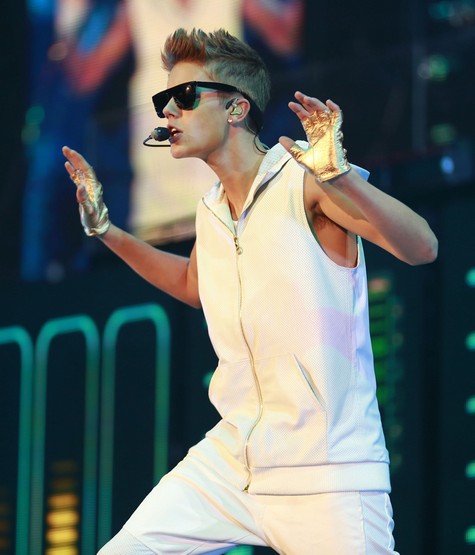 Well fans of bubble gum pop music, you can all rest easy tonight – Justin Bieber was not the target of a laptop stealing blackmailer. Turns out it was all much ado about nothing and was in fact a huge prank by the Biebs himself to pimp his new single Beauty and the Beat – featuring Nicki Minaj.

The elaborate hoax began with Justin reporting his laptop and camera stolen while he was onstage performing at a Tacoma, Washington concert venue. He then tweeted that he had a lot of personal footage on the camera.

When I covered this yesterday, I asked why Justin would have revealed this information, but I didn’t extrapolate that the cheeky little brat could have been punking the world. He (or his peeps) set up a fake Twitter account as @gexmy and began a campaign of simulated harassment against the teenage Canadian crooner that escalated as yesterday progressed.

First there was a fake nude pic leaked and then a few inconsequential video clips were “leaked” with something huge promised at noon today. Noon came and the “blackmailer” released Justin and Nicki’s video for their new collaboration. It’s an okay song and a cute video – if you’re a teenage girl who digs that kind of thing.

But back to the prank – sure it was an elaborate hoax and got lots of Twitter reaction and press coverage, but was it appropriate? The Biebs said he’s been the subject of harassment and unjustified accusations such as the fake baby mama drama of earlier this year. But does he really know what it’s like to be tormented on Twitter or on the internet?

Consider the case of Tyler Clementi – a gay student at Rutgers University who was secretly videoed kissing an older man by his college roommate Dharun Ravi. Ravi posted the footage on the Twitter and other social media outlets. Three days later Clementi jumped to his death from the George Washington Bridge.

The same day Bieber began his elaborate Twitter hoax, a British Columbia teen, 15 year old Amanda Todd, killed herself after a boy posted a topless photo of her on Facebook and she was tormented via social media and in person.

I don’t think the Biebs was trying to raise awareness of these critical social issues – if he had the exchange would have culminated in some meaningful message rather than a throw-away pop song and pool party music video.

I also don’t think he was being deliberately insensitive to the truly horrifying consequences social medial bullying can have. But if he’d given it a moment of thought, he should have known better. He pulled an elaborate stunt that some are calling genius and others juvenile that should not have happened.

With bullying a very real issue – particularly among the demographic of Bieber’s fans – how could he be so insensitive? How could his managers and handlers not see how offensive this stunt would be to families who have lost children to social media bullying?  In any case – the entire ugly charade was probably orchestrated by Scooter Braun – Biebs appears to be just too stupid to actually carry out a plan like this on his own.

So I’ll leave you with this – congratulations Justin, you got lots of attention for your new video. Yeah for you… But the scope of your prank is outdone only by the depth of your thoughtless disregard for the real-life struggles of your fans. Shame on you.