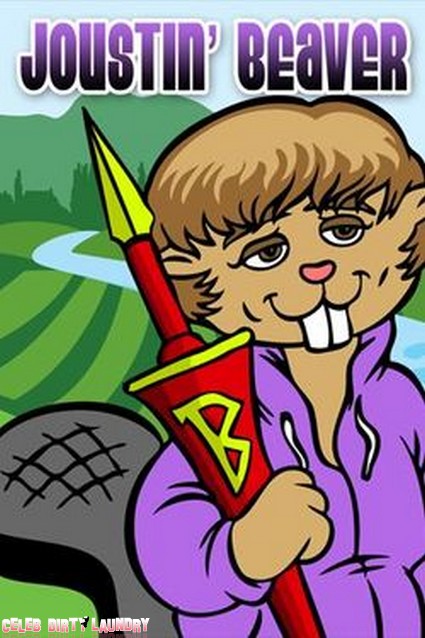 Justin Bieber will not tolerate any beaver who pretends to be him and his lawyers have taken measures to see that this stops. A company called RC3 have taken Bieber’s image in vain and created a mobile phone application called Joustin’ Beaver which is a cartoon game. Of course the cartoon beaver bears some resemblance to the teen idol and so Justin’s legal team have sent a cease and desist letter to RC3 demanding they stop production and sales of the offending product.

Of course the lawyers also want a full accounting of any revenue RC3 has earned from the game so they can demand a fat slice of it for little Justin. Poor Justin just can’t seem to be left in peace to earn an honest living.

RC3 says that Justin and his legal eagles can go dumpster diving – they are NOT going to comply with demands to shelve Joustin’ Beaver since the cute rodent is a parody protected under First Amendment rights.

TMZ has the exclusive:  Justin Bieber is pissed over a Beaver … TMZ has learned.  Let us explain. A company called RC3 has created a mobile app called Joustin’ Beaver. The app is a cartoon game, in which the user floats down a river, defending Joustin’ from the phot-hogs.

Of course, the Beev looks like Biebs, and that has rankled him so, his lawyers have fired off a cease and desist letter to RC3, demanding they cease production and sales, stat. Lawyers for Justin (the person) want the app removed from iTunes and they want an accounting of all revenues collected by RC3.  But RC3 says hogwash and will continue selling the 99 cent app, claiming it’s a parody and therefore protected by the First Amendment to the Constitution.

We have to side with Justin on this one. Parody is protected by the First Amendment to the US Constitution – and thank God for that – but Joustin’ Beaver is a BUSINESS that takes advantage of Justin’s great fame and popularity. As a parody – a concept, expression, or idea the beaver is protected – but RC3 have turned this parody into just plain big business and they should not have the right to do so without the Bieb’s permission.

What do you think? Which side in the dispute do you favor?