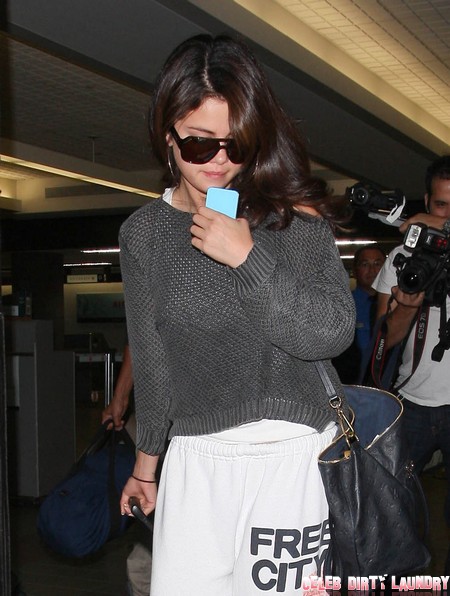 It looks like Justin Bieber can reap the benefits of stardom but can’t stand watching his girlfriend, Selena Gomez, do the same!  She has been filming Feed the Dog with handsome up-and-comer, Nat Wolff and their cozy scenes have made Justin extremely insecure.  So much so that he has been appearing on the film set, a lot, in order to claim Selena as HIS territory, not Nat’s.  The tension really escalated when Justin eavesdropped on a chat Selena had with a pal. A source close to Star says,

“Justin is very jealous of Nat. He was furious after hearing Selena tell a friend Nat is a good kisser.”

Well, that’s kind of funny and I think Justin is showing his (actual age) immaturity here. Remember back to when he was shooting that music video with the hot chick that was a dead ringer for Selena? Remember how the ex Disney princess stood off in the shadows watching with a smile on her face as her guy kissed the brunette look-a-like?  There was not a rumble of drama then. Then it was Justin’s job, but somehow when the roles are reversed, it’s different. Or so Justin thinks.

Should Justin be so insecure or maybe it’s about time that he feels a bit worried. Selena is stunning and older than him anyway. Justin doesn’t scream man just yet and at some point, Selena may decide that she wants one of those rather than “the Biebs”.  Could Nat be the catalyst for a split here? Might he be showing Selena a little bit of what she’s missing by being tied down to Justin?  Tell us your thoughts in the comments below!