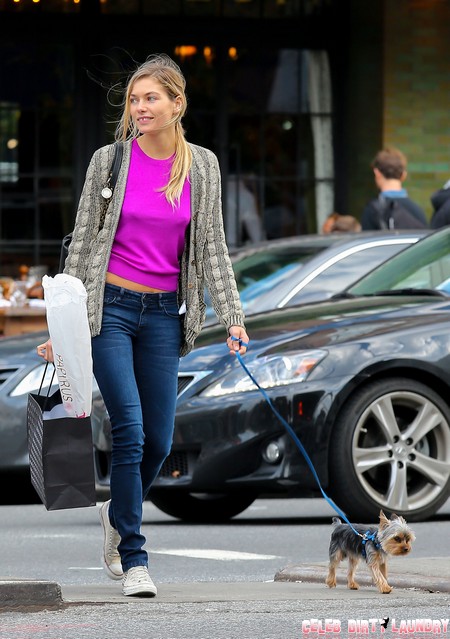 Selena Gomez should watch her back. Another woman may be coming after her man. Stories of a break up with Justin Bieber won’t go away and the latest rumors of a Victoria Secret model gunning for Justin might push the couple apart for good. Hope Carson at Gather is reporting that Jessica Hart is publicly gushing about how cute the Biebs is and can’t wait to meet him when he performs at the Victoria Secret fashion show on November 7. It’s not out of the realm of possibility that Justin would cheat on Selena or break up with her once and for all.

Justin has grown into a hot young man. When he graduated from high school this year he graduated to a new more grown up look, flashing his muscular biceps and abs.  Justin’s mentor, Usher, is known for showing off his abs and underwear when wearing his pants low. As the protégé Justin wants to emulate him and attract an older audience. Justin is going through an adjustment period of transitioning to an adult so it’s natural for him to behave this way, given the people he hangs with.

Another thing that might point towards Justin moving on is his taste in women. He is already dating an older woman (Selena is two years Justin’s senior) but he also likes to flirt with women much older than him. Justin was on Chelsea Handler’s show Chelsea Lately three times, and each time he shamelessly flirted with Chelsea. Justin wasn’t even out of high school yet so Chelsea’s response to his advances was ‘I’m too old for you.’ Justin didn’t let up! He said “I want to take you out”. After saying no several times all Chelsea could do was laugh. It was really cute but I think Justin really meant what he said!

At 26, sexy Jessica is 6 years older than Selena. Also, Jessica is walking the runway in her underwear and wings, while Selena’s work revolves around shows and movies for teens. Even her look isn’t very grown up. As I said before, Selena looks like a Kewpie doll. Her wardrobe is conservative, which is fine, but she could use a little bit of edge with her make up or shoe choice. I wouldn’t be surprised if Justin went after Jessica. Young men his age are looking to put childhood behind them, not prolong it.