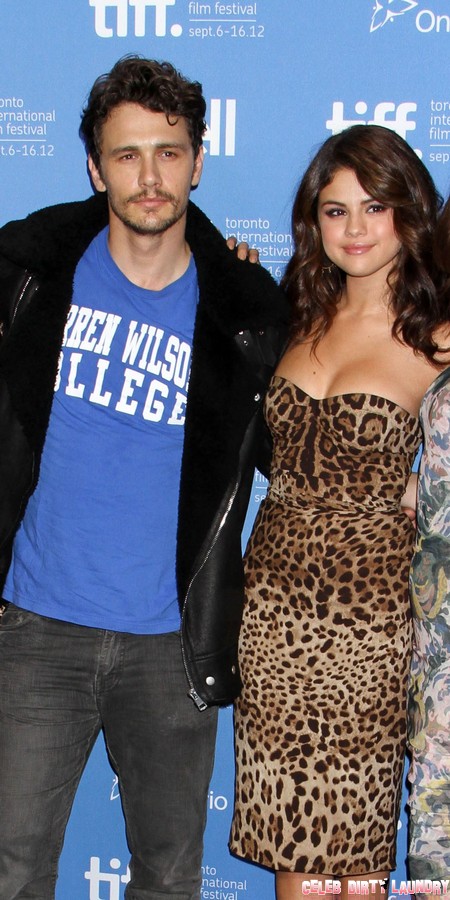 Justin Bieber, the man-child with a penchant for overreaction, once again turned into Regan from The Exorcist over Selena Gomez’s “flirty friendship” with her Spring Breakers co-star James Franco. The 18-year-old mini model/singer/tycoon threatened to throw James Franco a beat down of epic proportions.

We’re fans of Franco. The dude never pisses off anyone and always delivers these bizarrely outstanding performances in low budget indie-hits.  He never creates drama in his life, sticks to being a cool method actor and chills with his “aww shucks” face in the corner of almost-Oscar and almost-Razzie. However, the same cannot be said about the Biebs. According to the National Enquirer’s latest edition, it states that “[Franco] has gotten under Justin’s skin ever since he got close to Selena while they filmed [Spring Breakers] last year.” It’s extremely uncanny that everything always gets under Justin’s skin. Money, fame and fortune doesn’t make you God little Justin, it merely makes you a pompous and pretentious little tyke.

According to a source, “Justin is steaming at Selena for striking up what he considers an inappropriate relationship with James, but he’s directed most of his anger at James.” Well, slap us with a step-child from hell! Why is Justin always “angry” and/or “steaming” at people? Dude, you either need to go to anger management, or get a cat. Justin allegedly saw the images of Gomez and Franco at the recent Venice Film Festival and flipped out afterwards. He phoned up Gomez and said “that if he had been there, he would have beaten up James for coming on to her.” Gomez told Bieber that “they’re just friends and he had to stop acting like a spoiled child.”

We’re all for a little bit of teenage angst and jealousy, but Bieber is becoming as controlling as the Kardashians. He didn’t stop his stalking and possessive behavior there and surprised Gomez soon afterwards in Toronto. According to a source at National Enquirer, it wasn’t to kiss her on balconies made of Hope Diamond shards; it was to “keep an eye on her.” Bieber’s hovering mother, Pattie Mallette, spoke out about his behavior and said, “Justin is under enormous stress, so he’s acting out. Selena has warned him that she’ll dump him if he throws another temper tantrum like this.”

Temper tantrums and Justin Bieber go hand in hand, like paparazzi and cameras. Biebs, you better check yourself before you wreck yourself; otherwise Gomez might be sitting with Franco on a balcony made of Hope Diamond shards. Indie films might not pay as much as “Baby, baby, baby oooh,” but it definitely makes you more artsy.