Justin Bieber Strips Down To His Underwear (Photo) 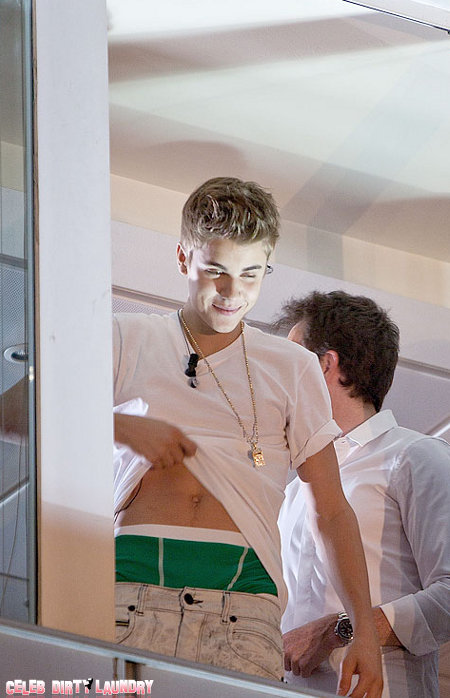 Justin Bieber has been all over the board recently in terms of what he’s willing to do to get a little attention, and just yesterday, while at the Vertice Studios for a taping of El Hormiguerio, he lifted up his shirt and gave a crowd of screaming fans a little peek at his flashy underwear.

Beleibers practically worship their lil’ Bieber, so we’re not the least bit surprised that this demonstration of skin and bright green fabric threw the overflowing mass of people into a full on state of frenzy. After what happened in Norway (complete and utter pandemonium as a result of his mere presence), we can only imagine what a little skin did to them all.

We’re glad Justin has recuperated after crashing hardcore into that glass wall while he was on tour, and I’m sure his screaming fans were glad he found enough strength to lift his shirt up. Looking at the photo above, it looks like he’s standing in front of a glass window and, knowing his track record with those transparent demons, we hope the guy behind him told him when to stop walking forward. Bieber might be pretty cool, but — and I’m sure some would disagree with me — he’s not super-mutant-superhero cool and, therefore, cannot walk through solid surfaces. You are a rock star, Justin, but even rock stars need to use doors. Sorry to disappoint you.

After he flashed the mob, Justin took to his Twitter account (he’s a very prolific tweeter) and said, “THAT WAS INSANE! I love that show. El Hormiguero is always fun. All the people outside . . . that was incredible. I LOVE SPAIN! Gracias. Te AMO.”

What do you think of Justin’s stunt? Is he turning into a famewhore? Rock star move or douchebag move? You tell us!