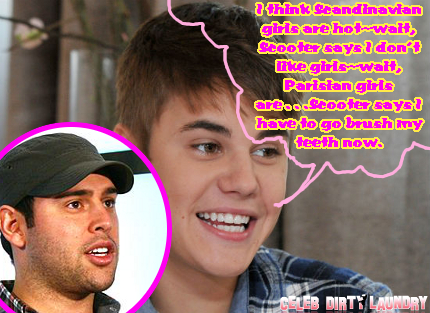 Justin Bieber always seems to be the talk around Hollywood, but recently the Hollywood limelight has been showering down upon him with full force. He’s been blamed for walloping an overzelaous photographer, who may or may not have been in the wrong; he unknowingly used his celebrity powers for evil when he turned the entire city of Oslo on it’s side, throwing it into a state of complete Biebermonium (everyone caught the Bieber fever — it injured some); he recently allowed a glass door to get the best of him; and now he’s letting his manager, Scooter Braun, control every aspect of his life to a near-disgusting extent.

In an interview he did with TMZ, Bieber chatted about a wide array of topics, including his ability to walk through glass doors, when he was asked a very harmless question: “Who’s hotter? Scandinavian women or Parisian women?” Justin, laughing, replied with, “I dunno’, Scandinavian women are pretty hot.”

“So you’re going with Scandinavian women?”

“Maybe, I dunno’, all girls are pretty um–“ And that’s when Scooter cuts in, shutting Bieber down. “Scooter says I have to go,” Bieber says.

So I guess, because of that damn Scooter, we’ll never truly know what Bieber thinks about this extremely pressing issue. But the fact that we never received a response from The Beebz really isn’t the issue here, is it? What really has us disgruntled is how he lets Scooter micromanage his life. Does he do anything on his own? Is Justin Bieber even real? GASP! Oh my gosh, he’s probably a robot being controlled by the master computer: SCOOTER BRAUN. I wonder if he actually loves Selena Gomez or if it’s a faux emotion that has been impressed upon him by the evil Scooter?

This kid is worth 100+ million dollars, and he actually says to TMZ that he has to get off the phone because Scooter says so! We understand that all celebs allow their PR people and managers to run their lives — it is, in all truth, how the business is run. But most don’t allow other’s to completely take away their voice either.

Honestly, what bad would’ve come from Bieber answering the question? Nothing. I certainly wouldn’t have bashed him for stating his perfectly harmless opinion. Now, I guess I’m just upset that he wasn’t allowed to . . . and that he didn’t stand up for himself.

The Beebz told TMZ that he had to get off the phone because “he’s concussed and not supposed to be talking for that long.” Excuses. I just wish that celeb managers would come out and say exactly what’s on their minds: “Sorry, my client will not be answering that question because we are afraid of what it might possibly do to their image. Goodbye.”

To hear Bieber’s entire interview with TMZ — and the excuse TMZ definitely doesn’t buy — click here. Let us know what you have to say! We love your comments, opinions, and, yes, even your criticisms. Opinions are what makes this world, especially the Celeb World, so freakin’ interesting.