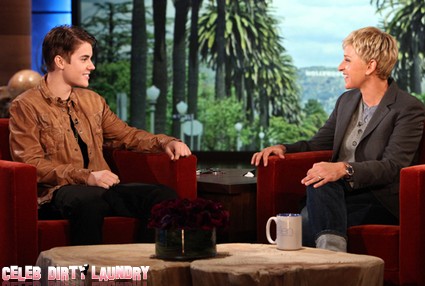 Happy Birthday Justin Bieber. The tween favorite finally hits adulthood today – he’s the big 18. So what does the most famous teenager in the world get for this all important milestone?  A new car!

Justin’s manager gave his cash cow  – I mean, star employee – a massive surprise during his appearance on Ellen which will air today. Scooter Braun gave the Biebs a shiny, black Fisker Karma. That’s a fancy schmancy environmentally friendly vehicle which is quite hard to get. (You can check out the video below). But of course when you want something for Justin…you can lay your hands on just about anything. So now Justin and girlfriend Selena Gomez won’t leave a carbon footprint when they are being chased by the paparazzi.

Of course Ellen wasn’t going to let the Canadian leave without a little something special for his birthday. She couldn’t top the car – but she did give him a custom made sun shade and bobble head.

Even though the birthday boy was cleaning up in the presents department he did have a gift for his fans. He announced his new single Boyfriend will be out on March 26. He explained what the title meant ‘Basically I’m talking to this girl, if I was your boyfriend, I would never let you go‘. It’ll be interesting to see where his superstar career goes now that he’s 18. Teenage girls will eventually move on and he’ll have to reinvent himself as well. He recently opened up about where he sees himself in the future Justin Bieber’s Career Plans