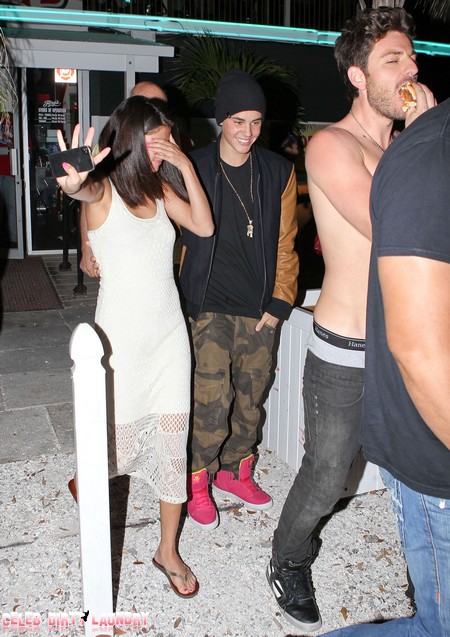 When you imagine Justin Bieber drinking, what sordid thoughts pop into your mind? Do you imagine your idol nervously throwing back a beer or three? Or do you imagine him scandalously sipping on a blue cocktail? According to the latest Star magazine report, Bieber’s mom, Pattie Mallette, doesn’t want to imagine either of those horrid thoughts.

The mega hit pop star is butting heads with his mama over his drinking drama. She is determined to stop the Bieber from following in her young-at-heart footsteps. An insider explains, “Pattie and Justin have been fighting nonstop about his drinking. Pattie completely flipped out because Justin always tells her that he never plays drinking games or gets drunk.”  Well, come to think of it, we’ve never really seen Justin sloshed out of his mind, have we? There aren’t too many sordid pictures of the Biebs falling out of a club, landing on his face, and crying like a bipolar lemur. Perhaps Pattie should chill her guava and allow the Biebs to live his own life? Look at what tiger parenting did to our Aunt Mildred – she’s an agoraphobic alcoholic with an addiction to Botox.

Allegedly, Pattie popped an aorta when she read about Justin and Selena Gomez’s cocktail and beer drinking escapades in Australia, where Justin is of legal drinking age. The insider explains, “She was a mess, crying uncontrollably. She’s terrified that she’ll lose her son to alcohol and drugs. But seeing his mom so emotional really affected Justin, and he swore that he would never let her down.” Jeez, Louise, the Biebs is a young kid with the world in the palm of his hand, if he wants to enjoy a few drinks with his girlfriend, it’s not really necessary to turn into Julia Roberts about it!

We don’t condone underage drinking, but for freak’s sake, the kid has many other influences that might send him off the rails, including those horrid lyrics of Beauty and a Beat. (Reminder: Stop talking about Justin Bieber’s songs – the ear bleeding caused by Beliebers might send us into a paranoid spin.)

Do you think Bieber’s mom is overreacting? Should she be slapped by a lemur and woken up from her nervous breakdown? Let us know your thoughts in the comments below. Oh, and Beliebers, don’t hate on us for hating Pattie.