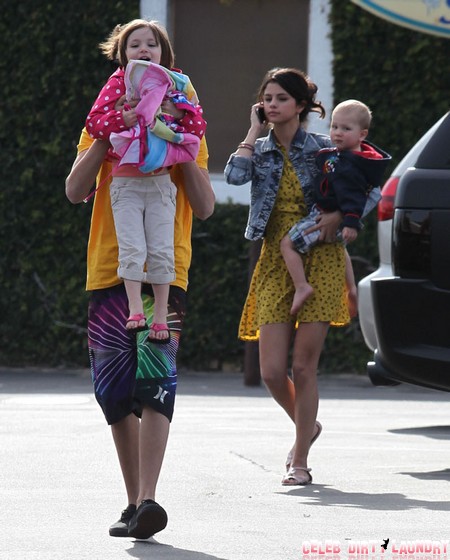 What has this world come to when Justin Bieber’s little 4 year old sister, Jazzy Bieber, has already started up her own Twitter account? I don’t know about you but I’m pretty sure that 4 year olds can’t even type, read full sentences, let alone enter the Twitter universe.  Somehow and in a very disturbing manner I see an connection between Jazzy’s Twitter exposure and Jessica Simpson’s string bikini display of Maxwell Drew.

It seems like it was Jazzy’s first day of school today and since her big brother Justin couldn’t be with her on the big day he decided to tweet this message “today is Jazzy’s first day of school! wish my lil sis luck! love u JAZZY!” Obviously Jazzy thought it was necessary to tweet about going to the dentist – earlier in the day Jazzy tweeted, “Just came from dentist! Make sure you take care of your teeth kids “) A nice smile goes a long way. “)“

Yeah, I’m pretty sure a 4 year old could have tweeted all of that herself even if there were typos, it’s just not possible for that to come out of a little girl. I’m guessing a family member started it for her, maybe even Justin or one of Justin’s handlers. You never know.

The worst part about that tweet is the little girl will have so many followers – and only because of her big brother’s status. Not like Jazzy will really know any better, but still, couldn’t the family have waited until the girl realized her big brother was the most famous man on the planet to people under 21? Poor Jazzy might think that she is special in her own right – oh well she’ll find out soon enough what it means to live in a shadow, even if that shadow showers you with gold.

Of course business is business so why not capitalize on every aspect of Biebermania?  Oh yes, wait, Scooter Braun and the rest of Justin’s team already make sure to do that.  The commercialization of the Biebs is hilarious. Now the scholar is writing a book!!!  LOL!!! Bieber can write!?  Who Knew?