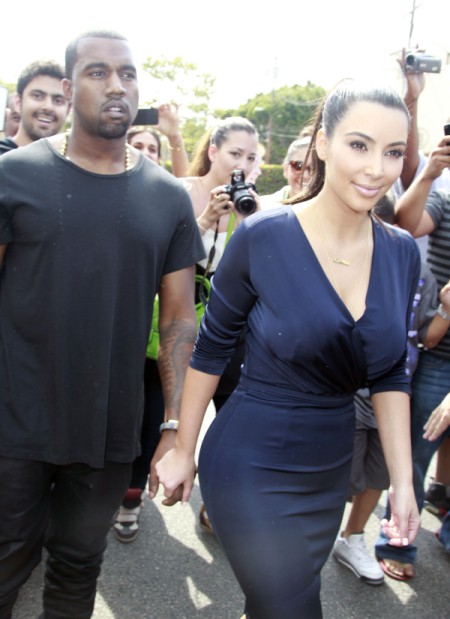 Kanye West is actually surprising me by the thoughtful engagement ring he’s designing for his current, married girlfriend, Kim Kardashian. Sure, she’s still technically attached to good ‘ole Kris Humphries but Kanye wants to be ready for when those tiresome divorce papers are finalized ’cause he likes it and he wants to put a ring on it.

Radar Online is reporting that Kanye has asked a private jeweller to design the ring using diamonds and rubies from his late mother’s personal collection. I like that SO much better than what Prince William did. He just gave Kate Middleton his mother’s old ring. It’s a pretty ring, but I agree with Elton John, it’s a little creepy seeing her wear it all over the place.

Anyway, who knew Kanye was such a romantic? “Donda was such an important person in Kanye’s life, he thought the world of her and was devastated when she died,” a source told Radar. “So, he kept all her jewelry as keepsakes – a lot of the pieces were items he bought over the years after he made it as a hip-hop star. And now, Kanye has found a woman he respects and loves just as much as his mom, so he wants to share her jewelry collection with Kim.”

I don’t understand why he loves and respects her but the idea is really sweet regardless. However, not everyone thinks this is one of Kanye’s best ideas – like charging the stage and ruining Taylor Swift’s award moment was a better one. His closest friends are worried that if Kanye and Kim break up she’ll keep the ring and Donda’s jewels!

“His friends think it’s a terrible idea and are advising him not to give Kim the ring,” the source said. “Because it’s a gift, it would be difficult for Kanye to ask for it back if they ever split up. They’ve also reminded him that Kim is not somebody who works hard for her money. She makes millions doing reality shows and selling her image, and Donda’s jewelry shouldn’t be part of that image.”

Dang, that’s cold! Do you think one of the friends is Jay-Z? They’re saying she’s a GOLD DIGGER! But damn them for making me defend Kim Kardashian! She actually works really hard for her money. Just because she’s not performing brain surgery doesn’t mean she’s not balls to the wall.

If this story is true, I’m actually convinced Kim and Kanye’s relationship isn’t just a publicity stunt and is on solid ground. I always wondered why Beyonce liked Kanye so much. I never saw it but I do now. This is a super cute and loving gesture. Let’s hope Kim doesn’t screw it up! Will she accept family jewels over the biggest diamond he can come up with? Her last engagement ring was ginormous and gaudy – but that’s what she likes. Will she be able to accept Donda’s jewels?

What do you think of the ring – too old and nostalgic or a heartfelt gift?