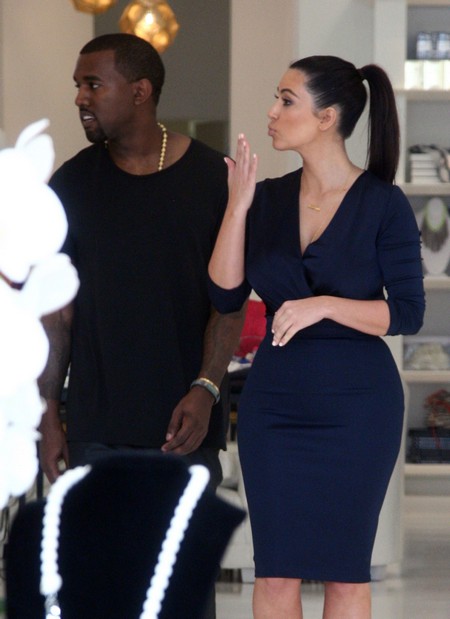 Kim Kardashian is fed up with her relationship with Kanye West and is prepared to move on. You ask the logical question: why is Kim dissatisfied with Kanye – what could be wrong? The answer might surprise you…

Is the problem that Kanye doesn’t love Kim enough?  Does Kim wake up at night worried that Kanye will throw her over when he gets tired of their relationship?  Nope – Kanye is mad about Kim and he loves her more than she has ever been loved before.

Could the problem be that Kanye doesn’t get on with her family?  We know that there were problems in that regard with her ex, Kris Humphries.  Sisters Khloe Kardashian and Kourtney Kardashian made their scorn for Humphries well known. Of course they knew that Kim only married him for the reality shows, that he wouldn’t be around long, and so they had no incentive to treat him like family.  But no, Kim’s family isn’t the problem. Kanye gets along wonderfully with the Kardashian/Jenner clan – they can’t get enough of him.  After all Kanye is a genuine A-list celebrity and he co-operates with their moronic reality TV empire.

What about sex?  Could Kim possibly find her sex life wanting now that she is with the great Kanye West?  Well we can’t really be totally certain about this but the answer appears to be that Kim is pleased with Kanye.  The two of them apparently already had one or more hot flings together before this latest relationship so we’d have to say bedtime is a good time.

Here is the problem and the reason that Kim may be forced to move on and leave Kanye swinging in the breeze: Internet searches for her name are down since she began dating him!!  Yes – Kim is not as popular as she used to be and she is blaming Kanye for this.  Kim keeps a close eye on the Internet to see how much is written about her and how many people are reading it.

Kim waltzed out of Kanye’s NYC apartment one morning after a sleepover and made sure that the paparazzi were there to photograph the evidence of her tryst. When news that Kim was dating Kanye broke, her popularity, as gauged by Internet activity, skyrocketed and the famewhore was ecstatic.  But since then, interest in Kim has taken a nosedive and she is experiencing ‘mood swings’ and developing a terrible case of psoriasis.

In fact Kim is questioning the wisdom of her choice of Kanye to be her lover.  He is not doing the job she expected for her popularity and Kim fears that she is becoming a ‘has-been.’ Kim really needs a Channing Tatum, Alexander Skarsgard, or maybe a Robert Pattinson.  So don’t surprised when you hear that Kim Kardashian dumps Kanye West – I won’t be.

OK! has the inside scoop: The ego has landed! Kim Kardashian had deemed boyfriend Kanye West too low profile, insiders tell OK!, and has set her sights on finding someone with a lot more fame.

Part of the reason getting together with Kanye was so appealing to Kim in the first place was that she thought it would keep her in the limelight, says one source close to the couple.

“She lost so much popularity after she and Kris Humphries announced their divorce, and she was terrified of losing her brand and losing her fame,” says the insider.

“Hooking up with Kanye was partially a strategic move, and she imagined they would instantly be on the cover of every magazine for the next year. And at first, that’s exactly what happened,” adds the source, and Kim is upset. “She’s totally addicted to being famous and can’t stand the thought of just becoming a had-been.”

Kim, 31, is constantly aware of the ebb and flow of her popularity, tracking it with the latest information available from social networking sites to the Internet.

“Kim has Google alerts on her cellphone, laptop, and iPad; if the number of alerts goes down, she starts to panic,” says the source. At first, Kanye was puzzled by her mood swings.

“She didn’t want to come right out and tell Kanye what was wrong, but he kept pressing her because he knew something was bothering her,” the source confides. “He was pretty blown away when she told him that Internet searches for her name are down since she began dating him, and that she wasn’t very happy.

“He can’t believe there is someone out there with an ego bigger than his,” adds the source.

Kim Kardashian is a famewhore and so is her momanager Kris Jenner.  There is nothing they won’t do to gain fame and promote their careers and businesses – sex tapes, marriages, divorces – are all fair game. They look at life not as something to live and enjoy but a set of opportunities to be exploited.  Make no mistake – these Kardashian/Jenner people are predators and their prey is you!  As long as you keep tuning in and buying their products (including watching their reality shows, reading the Twitter, etc.) they will continue to grow and prosper.  Ignore them and they perish.

The grand opening of DASH took place on Melrose in Los Angeles, California on July 13, 2012. Fans and shoppers filled the sidewalk and waited for the Kardashians to make their appearance.