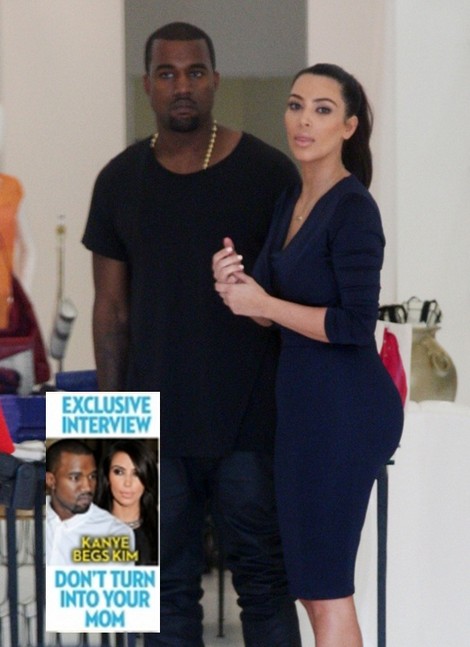 Kim Kardashian has been parading her new romance with Kanye West like tiny elves are paraded at the Unicorn festival, but now it seems that Kanye “Aggro” West is trying to cool down the relationship, because Kim’s controlling personality has sent shivers down his angry spine.

According to OK! via Hollywood Hiccups, the novelty of having a Kardashian by Kanye’s side is starting to wear off and he is getting pissed off with her “full on” attitude. A source reveals, “When they started dating, Kanye adored the way that Kim was assertive and ambitious, but now the novelty is wearing off. She’s full-on all the time and he can’t ever relax.” Well, we don’t blame Kanye. We wouldn’t even be able to sleep with a Kardashian freak show in our bed and God only knows what Kris Jenner has been up to. Never trust that Jenner bitch, she’s sneaky and we bet she licks Kanye’s face when he sleeps, like that alien licked Ripley’s face.

Kim and Kanye have been hot and heavy since they started dating in April, but Kanye is so concerned with Kim’s attitude and transformation that he is contemplating whether she is marriage material. He has since cooled off all baby talk. Kanye fears he will turn into another Bruce Jenner, after he witnessed how controlling and bossy Kris is. Trust us Kanye, even though you’re scarier than Herpes, you’re still not as dysfunctional and redundant as Bruce.

The insider adds, “Kris can be fearsome at the best of times, and Kim already shares some of her traits. Kim can be bossy, and she likes to be in control, getting her own way, just like her mum. Much as Kanye loves Kim, he’s terrified as she gets older she’ll become more like her mum – and he’s not sure he can live with that.” Goodness Kanye, like we said, we don’t blame you! If you really want to get out of the Kardashian cult- Well, there’s really no way to get out of that family of horrors, but if you really wanted to, the only thing we could recommend would be to escape when Kris and Kim are resting their eyes (these bitches don’t sleep). Watch out, Bruce loves telling the world what a great athlete he was, so he might impale you with a lamp post as you run for your life.

In other news, Kanye was on a recent episode of Keeping up with the Kardashians (bitches) and tried on some of Kim’s dresses. We’re yearning awkwardly for any form of absolution. Please, dear Kardashians, please do not submit us to any more of this. We’ll send you Honey Boo Boo and Glitzy, if you please just let us go!

Let us know in the comments below if you think Kim is a controlling bitch who needs to slowdown.