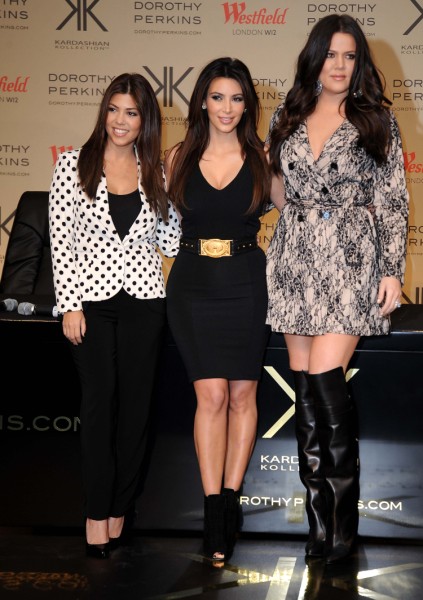 The Kardashian sisters may be American (trashy) royalty, but their power ends where the east meets the Atlantic! Kim Kardashian, Kourtney Kardashian, and Khloe Kardashian launched a British line of clothing earlier this fall, and the pieces are collecting dust in London! Kim tried to get free publicity by name checking the Duchess of Cambridge as a perfect style icon to rock the trashy collection, but excitement for the brand fell after Kate Middleton rejected it. Since the major publicity faux pas, stores have had to slash prices drastically just to encourage shoppers to invest in the Kardashian’s Krap Kollection.

A source told National Enquirer, print edition December 31, 2012, “All of the clothes are just sitting on the racks, taking up space. No one is buying them, and it’s such a pitiful sight. The store just wants to clear them out so they can be replaced with items that actually sell.”

The line features blazers and blouses mixed with edgy short skirts, skin tight pants, and bedazzles everywhere. “Kate can’t stand their style and wouldn’t be caught dead wearing Kardashian gear,” the source said emphatically. “The Kardashian outfits just aren’t appropriate for royalty. Kate is hardly going to turn up for an event with the queen in a cheap leopard-print miniskirt or gold-sequined jacket!”

Hey, never say never! Seeing so much trashy fashion may send Queen Elizabeth over the edge and into the loony bin, accelerating Prince William’s ascension to the throne!

Evidently, the only part of the collection that sells is the purses, because they lack huge logos on the outside so women aren’t ashamed to carry them around. “You can’t tell the Kardashians actually designed them,” the source explained. “Customers tend to be less embarrassed to buy them. Everything else screams Kim, Khloe, and Kourtney—and no one is willing to pay top dollar to look like clones of these girls.”

Kim recently received flack after trying to compare her sense of style to Kate’s—it was quickly brought to her attention that no amount of good taste can erase a sex tape or Playboy spread, and that Kate is infinitely superior to the middle Kartrashian sister. If the UK is rejecting the Kardashian spread across the globe, could this be more than just a bump in the road? Could the Kardashian reign of terror be coming to a close? Did Kourtney, Khloe and Kim Kardashian fail?