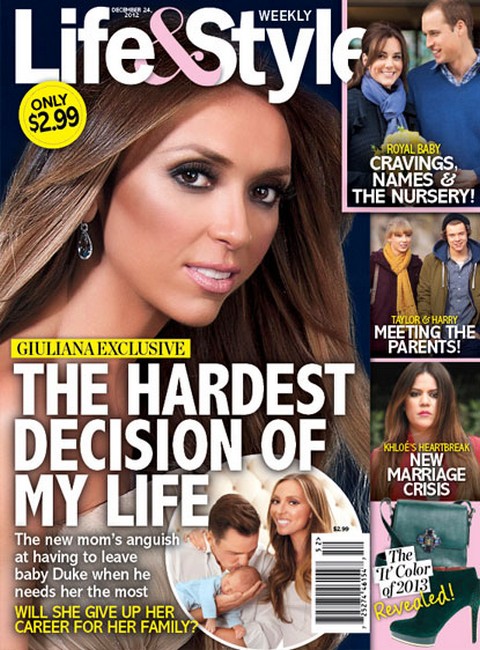 On the cover of the latest issue of Life & Style magazine, there’s once again a smattering of stars, but Giuliana Rancic’s exclusive, Khloe Kardashian’s heartbreak crisis, and that relentless Taylor Swift and her boy toy Harry Styles have nothing against the most popular coupling this side of peanut butter and jelly. In the top left corner, we have a very happy looking Kate Middleton and Prince William looking like a Hallmark card family with the tagline: “Royal Baby – Cravings, Names & the Nursery.”

The internet has already been flooded with reports that Kate and William might name the child – if it is a girl – after William’s late mother, Princess Diana. There’s not yet any validity to these reports, but we do know that a child who goes by the name of Diana will surely send the Royal family into a flat spin. Kate was hospitalized for an acute form of morning sickness that forced her to reveal her pregnancy to the world. She was released from hospital late last week, but she’s still extremely sick. According to medical experts, this type of acute morning sickness – hyperemesis gravidarum – mostly appears in women who are expecting either a girl or twins. This only further fired up the public’s interest in the baking bun in Kate’s oven, as many media outlets started reporting that Kate was expecting twins. The name is still very much up in the air, but expect something royal in a few months’ time – Maximillian anyone?

As to the cravings and the nursery, we can only assume that the child will be housed in a palatial suite the size of a small city. We doubt Kate is craving anything strange – like oysters and Eartha Kitt – because her illness is forcing her to vomit up most of the food she is taking in.

There you have it – Kate Middleton is vomiting because of an anonymous baby.

If you’re interested in reading more about Kate’s pregnancy difficulties, the exclusive Rancic story, the Khloe heartbreak crisis, and the Taylor/Harry coupling