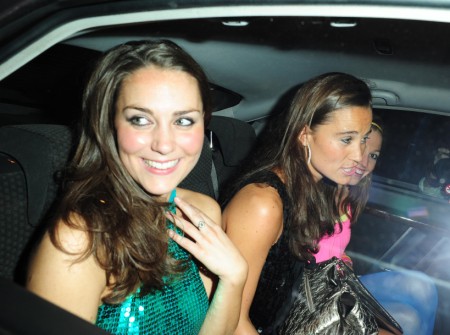 Both sisters are tough, but it seems Pippa Middleton can take the hard knocks of life better than her famous, royal sister, Kate Middleton.

The UK’s Female First magazine revealed the ladies’ former teacher, Kevin Allford, from Berkshire prep school St Andrew’s, said he’s not surprised they have handled their rise in the world so gracefully. He told the Daily Mail newspaper: “They were both tough. Though Pippa was tougher than her sister, better at taking knocks than Catherine.”

Both have taken their share of knocks since Kate said “I Do” to Prince William over a year ago. Some of it has been warranted, such as Pippa’s gun debacle in Paris, and some of it not so warranted, like criticism over Kate’s fashion choices.

But that was then. Now is a whole different animal. Reports have surfaced that Kate and Pippa are in the middle of a quiet war and the times the ladies’ have always carved out to visit one another have become few and far between. They aren’t on the field hockey pitch anymore. The stakes are higher now for Pippa to one-up her older sister. I’ve heard flamboyant Pippa has always been the one to take charge and be the center of attention in the family and she isn’t handling her sister’s unprecedented fame too well. That sounds perfectly normal though, don’t you think? I can’t imagine what it must be like to have a sibling so famous – especially a sister who is close in age. Of course you love them and want the best for them but it’s got to be difficult. If Pippa didn’t get the least bit jealous every once in awhile I’d think she wasn’t human.

So it’s a positive thing that Pippa’s considered the tougher of the Middleton sisters. She’s going to need that thick skin if she’s going to be able to navigate through this life as “Kate Middleton’s little sister” and keep her dignity and reputation in tact. The media is looking for another Sarah “Fergie” Ferguson and it’s got its eye on Pippa to fulfill that role. Hopefully she can create something a little more respectable for herself.

Do you think Pippa seems like the stronger of the sisters or do you think people underestimate Kate and her stoic demeanor?