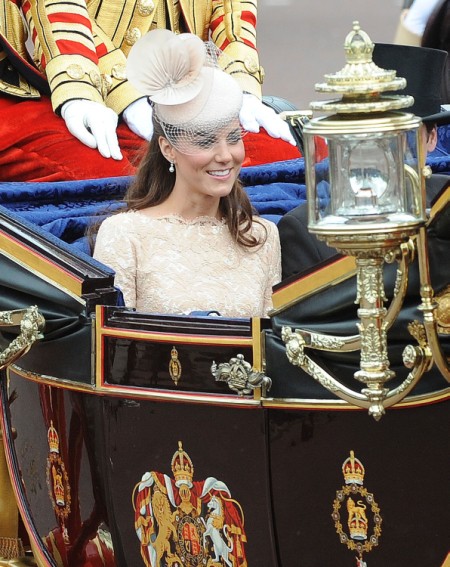 Kate Middleton is under fire again for the love of her nude, go-to, L.K. Bennett shoes and critics are wondering if the princess has any other kicks she can swap for all her royal occasions.

The Daily Mail asks the age old question, “Does Kate Only Own ONE Pair Of Shoes?” in its top story this morning. It goes on to cite each public occasion she’s worn the patent pumps and I’m counting around a dozen. And apparently she has at least two pairs of the same shoe, though one is shinier than the other. So what’s the problem? They’re $300 shoes. I’d wear them down to the nub before I moved on to another but I’m just cheap like that, and I’m not a princess.

But the Daily Mail’s Liz Jones isn’t having it. She says, “It’s her [Kate’s] job to surprise us, and showcase up-and-coming British talent.” Do you agree? I’m so so.

This isn’t the first time Kate’s gotten lambasted for sticking to her high street sensibilities. British shoe designer, Nicholas Kirkwood, who’s known for his eccentric styles, called the princess out last month for her reluctance to sway from the sensible. Kate followed up the criticisms by rocking a pair of Jimmy Choo hooker heels to a couple events, sans pantyhose, and managed to shut the critics up for a spell. But, apparently, that wasn’t enough.

I thought Kate looked absolutely gorgeous throughout the Queen’s Jubilee celebrations. She managed to stand out without overshadowing the Queen which is a risky venture. She stunned the crowds again and again and confirmed her ability to pick the right outfit for the right occasion. Would other pairs of shoes be nice to see? Sure, why not? But I don’t think we’re going to get it. Kate and Prince William are determined not to be clothes horses and splurge while the economy is hurting. But Jones cries balderdash to that lame excuse as well. “I’ve heard the predictable argument that, in a recession, Kate should not splash the cash. This is wrong. This nation will only become great again if we buy British, and Kate’s job is to inspire and ignite our passion for fashion (remember retail is the UK’s biggest employer), not bore us with Bennetts.”

Where do you stand in this shoe controversy? Should Kate keep doing what she’s doing or is she missing a step with her bland heels?