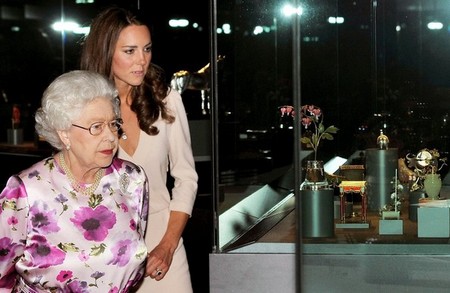 The life of a Princess isn’t as easy as you and I would think, just ask Kate Middleton. Sure the royal watchers absolutely adore her, she has the obvious love of Prince William and then there is that wardrobe that’s to die for- life should be pretty amazing for Kate. Instead she is under an insane amount of stress because of constantly being under a microscope. Since the topless photo scandal Kate has come to understand that she can’t drop her guard for even a moment because there is likely to be someone hiding in a bush nearby waiting for an opportunity to portray her as, gasp, human!  Then there’s her sister Pippa Middleton who is a party girl by nature and usually one drink away from embarrassing the royal family beyond belief.

There have been rumors almost since the first moment that Kate and Wills married that a baby would be their first project. After all, that’s how it always used to be. A royal got married and there was an expectation on them to produce a child sooner rather than later. Everyone seems to really want Kate to be pregnant, including Queen Elizaebth. So much so that she has actually vowed to make William the next king if Kate produces a child soon. The pressure is so immense that Kate, eager to please everyone has resorted to fertility treatments to make William a father- and a king!  The December 3rd issue of the GLOBE has more,

“The traditional royal way has always been to produce an heir and a spare as soon as possible after the wedding. But it just hasn’t happened for them after more than 18 months of marriage.  They spent a lot of quality time together and believe me, they’ve been trying!  Maybe the stress of her royal engagements at home and overseas has hampered her efforts to get pregnant.  Kate became increasingly worried that she isn’t yet pregnant-and after consulting with doctors, she decided to undergo IVF treatment. Kate wants her baby quickly and she doesn’t mind if it’s a boy or girl. But, of course, if she has in vitro fertilization there’s a good chance the royal couple could produce twins!”

The stress could definitely be preventing Kate from conceiving naturally and truthfully, most women won’t resort to desperate measures as quickly as she is. Kate and William have only been married for 18 months now which leads me to think that it’s the added pressure that is making Kate resort to modern medicine. I have to say, I think the Queen is likely looking for (and can find) any excuse to have William crowned King so that his father, Prince Charles, will never take the throne.

Do you think Kate is really going through in-vitro fertilization?  Is she that desperate to please the royal family? Tell us your thoughts in the comments below!