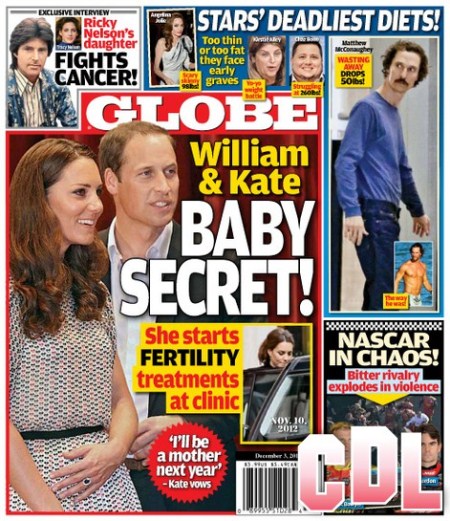 The cover of this week’s GLOBE reveals the previously hidden baby secret of Kate Middleton and Prince William – Kate is getting royal fertility treatments!  Kate has been trying to get pregnant for a while now without any success but Queen Elizabeth’s promise to make William King has made producing a royal heir top priority.  GLOBE revealed recently that Queen Elizabeth has decided that Kate and Will should ascend the throne rather than discredited Prince Charles and despised Camilla Parker-Bowles.  As we reported here on Celeb Dirty Laundry today, recent polls show that William and Kate are vastly more popular with Brits than Charles and the nasty millstone around his neck, Camilla.   Queen Elizabeth has taken note!

Charles, as her son, had every expectation of ascending to the throne after his mom but an unpopular career featuring adultery and extravagant spending combined with his complete lack of the common touch has forced Elizabeth to change her mind.  However, the Queen has made Kate’s pregnancy and consequent baby a condition of changing royal protocol and making William her direct successor as Elizabeth wants to insure that the monarchy will be secure for several generations.  Now GLOBE reports in the December 3rd print edition that Kate is vowing she’ll “have a baby next year.”  Fertility treatments have become extremely popular and effective over the past few years and we hope that Kate and Will get the news they are hoping for shortly.

Also featured in this week’s GLOBE is that Ricky Nelson’s daughter, Tracy Nelson is stricken with cancer.  This awful news is so sad considering how much the poor woman has already suffered.

GLOBE offers a special expose on the ‘Stars Deadliest Diets’ in this week’s issue.  Kiristie Alley’s yo-yo dieting and the potential toll on her health are explored as well as Chaz Bono’s dangerous inability to slim down below his current morbidly obese 260 pounds!  Perhaps most alarming is Matthew McConaughey’s drastic starvation diet to look like an AIDs patient.  Such sudden weight loss can damage organs including the heart!

NASCAR violence rounds off GLOBE’s cover as the bitter rivalry between Jeff Gordon and Clint Bowyer leads to violence.  As if racing cars isn’t dangerous enough!

Reading this week’s GLOBE is my top priority so I can get the inside details on Kate’s struggle to get pregnant with William’s baby.  Only GLOBE has palace sources that are always accurate and forthcoming and this is why I turn to GLOBE each week for royal information unavailable elsewhere.  This Thanksgiving GLOBE will be my reading material both after and before my family dinner.  With GLOBE the windows into the celebrity world are opened and all the shocking details revealed.