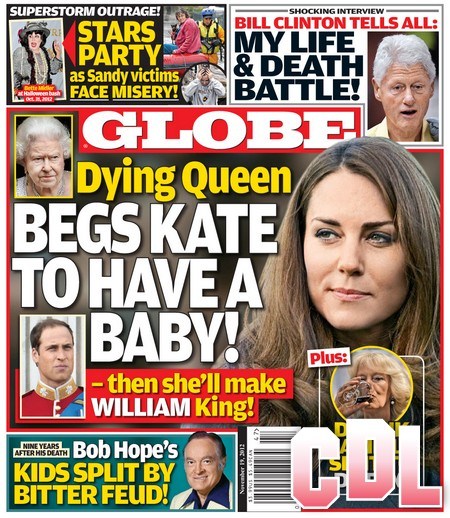 Queen Elizabeth II is begging Kate Middleton to get pregnant!  GLOBE reports on the cover of this week’s November 19th issue that Queen Elizabeth has taken the unprecedented step of making The Duchess of Cambridge a solemn vow.  The dying monarch has told Kate that if she can produce an heir to the British Throne then she will make Prince William the next King of England!  As GLOBE reported in the November 5th edition Queen Elizabeth is suffering from heart disease and is dying.  The last thing the royal ruler wants is to see her daughter-in-law, the evil Camilla Parker-Bowles, and discredited Prince Charles, take over the monarchy.

If Kate and William can manage to get pregnant, and the royal sunbathers have been trying their best from what we hear, then their child will one day inherit the throne.  In fact, bowing to pressure from a more progressive populace and parliament (and probably Kate herself!), Elizabeth has accepted that Kate’s first child will be the heir, regardless of the child’s sex.   Of course many people are hoping that Kate’s first baby will be a little girl and that she will name it Diana, in honor of Williams beloved mother, the late Princess Diana.  Of course this would one day lead to a Queen Diana which would be extremely popular.

But all that nice baby girl talk remains moot unless and until Kate heeds the Queen’s pleas and gets with child.  This might require Kate to start eating some food – as we have speculated here on Celeb Dirty Laundry the Duchess might have too little body fat to allow pregnancy. It is nature’s way – it is not unusual for the reproductive system to suspend operations while women have very low body fat.  In keeping with cruel Camilla’s character, as has been well documented and exposed by GLOBE, we can expect the jealous fiend to make sure Kate gets nothing but low-calorie diet food.

On this week’s cover GLOBE also reveals the disgusting but expected news that Camilla is being forced into rehab order to detox.  In fact Camilla was in India recently where she attended what was euphemistically termed in the British press as a ‘holistic retreat.’  This ‘holistic retreat’ was more like a drunk tank and designed to try to sober up creepy Camilla. Of course the media in Britain is not free to disrespect the royal family like we are over here in America.  In other words, they don’t always report the whole truth when it comes to Royal scandals and trouble. This is one reason Camilla gets away as often as she does with her creepy schemes designed to ruin Kate’s reputation and prevent her step-son, Prince William, from taking his rightful place as the heir apparent.  Fortunately we have GLOBE to step in and fill the breech – GLOBE tells the true story, regardless of how shocking it may be.

GLOBE also exposes that Bob Hope’s children are split by a bitter feud.  I’m sure when we read the November 19th GLOBE print edition we’ll learn that this family feud somehow involves money.

Poor dying Bill Clinton discusses his life and death battle in a shocking interview featured in this week’s GLOBE.  Clinton has suffered from serious heart disease for years and has already had open-heart surgery AND angioplasty to deal with the consequences of his advanced atherosclerosis.

GLOBE is right on with its Hurricane Sandy coverage exposing several selfish celebs that partied on without regard for the terrible suffering of the victims of this American tragedy.  These entitled rich folk remained oblivious to the misery of Sandy’s victims.  Thanks to GLOBE we won’t be oblivious to these bums heartless disregard for the fellow Americans.

Those of us who insist on being well-informed about what really goes on behind the scenes on a wide range of topics rely on our weekly GLOBE.  With my copy of GLOBE in hand, I know my weekend will always be a treat.  There is no source that gets inside a story like GLOBE – nothing ever gets in the way of GLOBE’s accurate incisive reporting and that is why I love it.