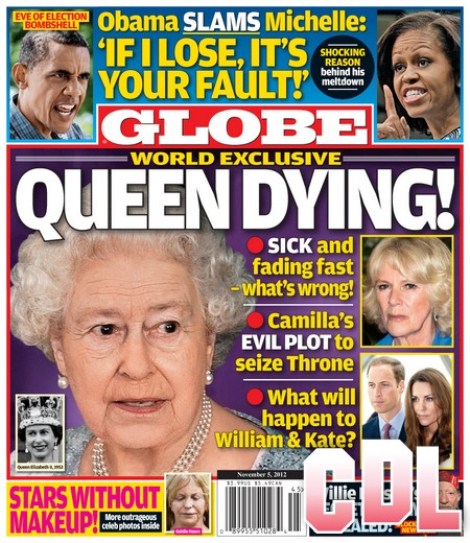 According to GLOBE Queen Elizabeth II is dying and the royal vultures are starting to circle.  Allegedly, the 86-year-old monarch is sick and fading fast.  This is terrible news and we want to know exactly what is wrong with the aged Queen.  GLOBE promises to reveal the details of Elizabeth’s health problems in this week’s November 5th print edition of the magazine.   We hope that the Queen is able to recover from whatever ails her and continue her glorious reign.  Elizabeth’s illness and possible passing would not only be terribly sad but have a host of ugly consequences as well.

The ugliest of the consequences would be that dastardly Camilla Parker-Bowles might achieve her aim of stealing the throne for herself and Prince Charles.  As everyone knows, Charles is the ‘rightful’ heir according to tradition and protocol but is hardy fit to occupy the throne.  Charles and Camilla both divorced after engaging in an extended cheating affair together.  Their respective first spouses were none other than Prince William’s mom, Princess Diana, and respected army officer, Andrew Parker Bowles.  Camilla’s drinking problems and her nasty war against Kate Middleton render her both unpopular and unfit to be Queen Consort.  Charles is out of touch with the British people and will never recover his reputation after cheating on popular Diana. If the Queen passes away before making other arrangements we might be stuck with that unsuitable pair as rulers of the British Empire.

GLOBE reveals on the cover that Camilla is plotting to seize the throne and of that we have no doubt.  GLOBE explains how Camilla is scheming to use Queen Elizabeth’s medical problems to make a move to usurp the monarch’s position while she is weak.  It is just like Camilla to strike at someone while they are down.  That’s exactly what Camilla did to poor Kate Middleton after both her Honeymoon photo scandal and her topless sunbathing debacle. What’s even worse is that Camilla hates both Prince William and Kate William with a passion and so, if she manages to steal the throne from an ailing Elizabeth, the consequences for Will and Kate could indeed be dire.  GLOBE explores all the ramifications of Queen Elizabeth’s illness in this week’s issue – GLOBE is MUST READING for anyone who wants to know the latest information directly from the Palace during this crisis.

GLOBE also exposes Willie Nelson’s secret family in this week’s edition.  Where do you suppose old Willie was hiding the gang?  My guess is the secret family were camouflaged in a cloud of smoke or somewhere deep in a weed field.

We also get to see some of our favorite stars displayed as they really are without makeup in this week’s issue.  That might be a bit scary so make sure you are sitting down when you look at the candid photos.

While we are very sorry to hear of Queen Elizabeth’s illness we are relieved that GLOBE is on the story. With GLOBE’s accurate coverage I can rest assured that I’ll be party to privileged information that other news sources will be unable to access.  GLOBE always satisfies my curiosity on issues that matter most to me and that is why it remains number one on my reading list!