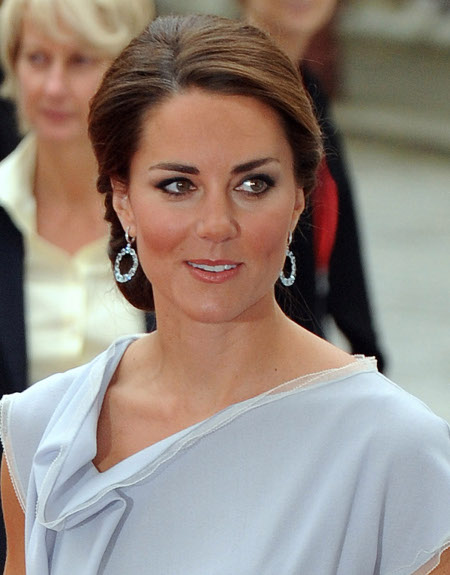 Kate Middleton continues to add fuel to the ongoing pregnancy rumors after refusing to drink wine during a toast for The Queen, all while attending a royal banquet in Singapore earlier today. The royal superstar, while snuggling up close to Prince William, decided to invest in a sparkling glass of water instead. While she may have another reason for avoiding the alcohol, it’s highly unusual for royals to make toasts with anything other than wine and, given the fact that mamas-to-be are required to abstain from the consumption of alcohol for the health of their child, we’re thinking it must mean that she’s a super preggo royal.

According to The Royalist, there’s been numerous other rumors surrounding Middleton, ones that have alluded to the fact that she’s already pregnant and her and Prince Will are holding off as long as possible to announce the pregnancy.

While at the banquet, Will and Kate enjoyed a beautiful Chinese meal, complete with smoked duck and marbled goby. We’re not denying the fact that this is all just heavy rumorage, but it’s reasonable rumorage. It’s no hidden secret that Prince William and Kate Middleton are eager to start a family. After all, that is one of their jobs as the leading royal couple.

Kate recognizes the fact that there will be a heavy amount of attention placed on her womb, and it makes sense that she and Will would try to keep the pregnancy on the down low for as long as possible. Because once this secret gets out, well . . . nothing, not even the reunion between two long lost vampire loves, will be able to compete with the earth-shattering news.

“I hope we will be able to have a happy family ourselves,” Kate was quoted with saying in their engagement interview. The couple was eventually asked if they wanted to have a big family, one filled with many, many little royals. Prince William replied, “I think we’ll take it one step at a time. We’ll sort of get over the marriage first and then maybe look at the kids. But obviously we want a family so we’ll have to start thinking about that.”

What do you think about this latest rumorage? Do you think Kate Middleton refusing a glass of wine — a brilliant burgundy Faiveley Puligny Montracht ler Cru Garennes (2008) — is a sign that she has a royal bun cooking in the oven? We’re hopeful. Very hopeful.