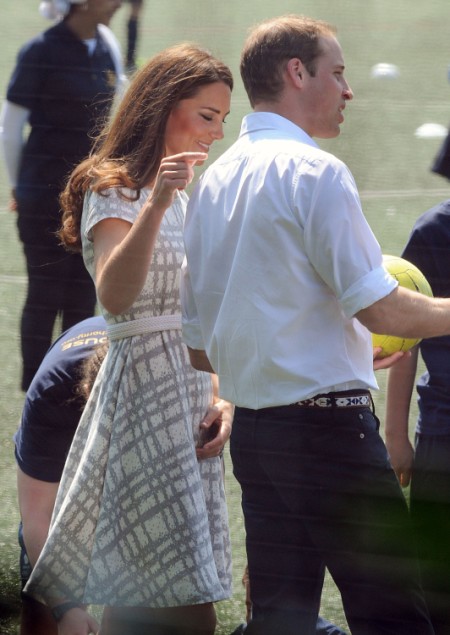 A conservative politician is under fire today for announcing that Kate Middleton is pregnant. The news took place at Kate’s old school, Marlborough College, no less. And not only did Claire Perry speculate on a royal baby, she marginalized it further by adding it would be good for business.

Speaking as part of a panel, Perry told an audience of more than 250 people, “I think Kate Middleton is pregnant – and that would be good for the economy.”

It might be OK for the media to guestimate on Kate’s baby-makin’ but it definitely isn’t for a member of parliament. Perry is getting ripped to shreds over her comments. The Telegraph explains:

Her outspoken comments have already been condemned as “unhelpful” and “none of her business” by Royal observers.

Royal historian Hugo Vickers wondered whether Mrs Perry might be “trying to make a bit of a name for herself” by making controversial comments, adding: “Unless she has visited the same gynaecologist it strikes me as extremely unlikely she might know.”

He said: “It’s quite clearly none of her business to make remarks of that kind, and presumably it is not very helpful either.

“She seems to be a bit of a loose cannon, and this is probably more loose cannon fire from Mrs Perry.”

He added it was inevitable that people would speculate about a future Royal baby, but said that MPs doing so in a public arena was “going a bit off beam”.

It does seem a little weird that Perry would make that statement. I get that Kate would come up since the panel took place at her old haunting grounds but it was pretty rude. Apparently Perry is kind of like the Joe Biden of the English – she sticks her foot in her mouth a lot. The Telegraph said she’s known for making inappropriate comments. Honestly, I don’t think it was that bad. I think the idea that it was opportunistic was more the problem especially since the point in question was if the Olympics would help the economy. Kate’s baby bump didn’t have to come up in the discussions. Perry had to have known that by using the words “Kate Middleton pregnant”, her name would be plastered all over the newspapers. Clever one, isn’t she?

What do you think of Perry’s name-dropping? Does it sound like she was using the Duchess of Cambridge to gain exposure? It worked I guess, but probably not like she wanted it to!