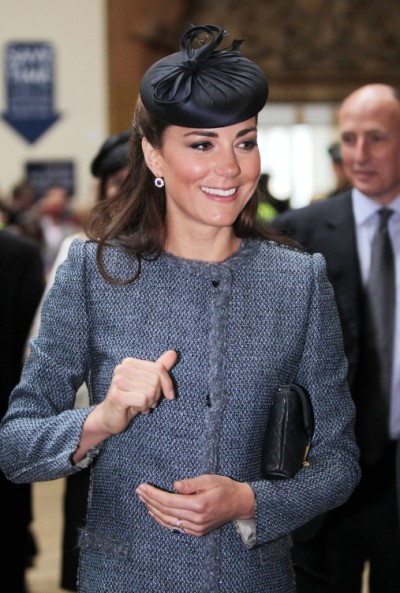 Kate Middleton may or may not be pregnant at the moment, but that’s not stopping the DIY princess from nesting before the little royal makes his appearance.

Sources say the Duchess of Cambridge is overseeing renovations of Kensington Palace because she and Prince William will move into the historical digs permanently if he decides not to undertake another tour with the Royal Air Force. Currently they’ve been cutting their time between Anglesey and London while William continues working and Kate continues her princess training.

The apartment once belonged to the Queen’s late sister, Princess Margaret, Countess of Snowdon, and is desperately in need of some TLC. But outdated curtains and dusty furniture aren’t the only reasons Kate’s keen to clean; she and William want the extra space for their (hopefully) growing royal family.

“They’ll want the extra space and security,” a source told Us Weekly. “She’s keen to work with interior designer Kelly Hoppen, but she wants to do a lot herself. This is why William has chosen not to share his future RAF work plans until next summer. If they’re expecting, it will be full-time London for them.”

For someone who rarely speaks, Kate is really trying to make a statement, isn’t she? She recycles her clothes like she’s on a budget, does her own make-up (albeit a little too heavily at times), and now wants to to redecorate a 300-year-old piece of history with as little help as possible.

I want to buy that Kate is really Susie Homemaker, money conscious, but I’m not sure if it’s an act or not. She grew up privileged and rich and started dating a prince when she was a teenager. She tasted the finer life at a very early age even though she grew up “middle class”. All of this redecorating and recycling is a challenging adventure for her – not a necessity like it is for so many others. Does that bother you? Is Kate the new kind of renaissance princess who shuns fashion risks for trips to Home Depot or is her contrived frugality beginning to get on your nerves?