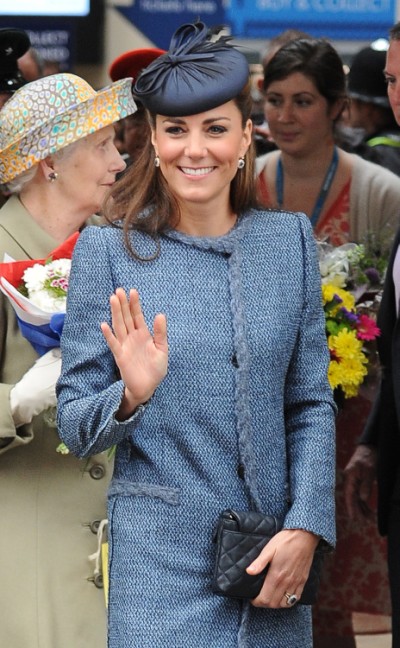 Kate Middleton sported a new bump under her recycled Missoni coat as she and husband Prince William accompanied the Queen on another Diamond Jubilee tour visit. Kate tried to keep her hands and navy clutch over the tell-tale sign but we managed to spy a little pooch poking out. And does her face look fuller to you?

Kate wore the same jacket in March when she visited Fortnum & Mason with the Queen and Camilla Duchess of Cornwall and at that time her belly gave no indication of a royal bun in the oven.

Perhaps we just want to see it more now? With William’s recent musings about the joy of having a family, babies have been on the brain and we’ve all be waiting for the announcement to happen any day. Sources thought the royal newlyweds would wait until after the Queen’s Jubilee celebrations were over and it’s about that time. What planners those Windsors are, don’t you think? How in the world can you get a womb to do your bidding so easily?

But is this another case of crying wolf? Kate wore another recycled coat to William’s cousin’s wedding over the weekend and no one said anything about a burgeoning belly then. And she was leaving nothing to the imagination in the cream Alexander McQueen dress she rocked at the Queen’s Jubilee Thanksgiving service last week. Could a bump just develop over night, especially on one so thin? Do you think she’s got that pregnancy glow or is that her usual overuse of bronzer shining through?

I’m no bump watch expert but I think because of Kate’s rail thin “she’s down to 90 pounds” frame, she wouldn’t even begin to show until she’s like 5 months pregnant anyway. And she usually keeps her hands clasped in front of her body like that. I think it’s like royal protocol or something, or the proper way to stand, which is probably why I never do it.

I DON’T KNOW! What do you think? Would she show that fast or are we just wishful thinkers?