Report: Kate Middleton Is Under 90 Pounds And Starving Herself 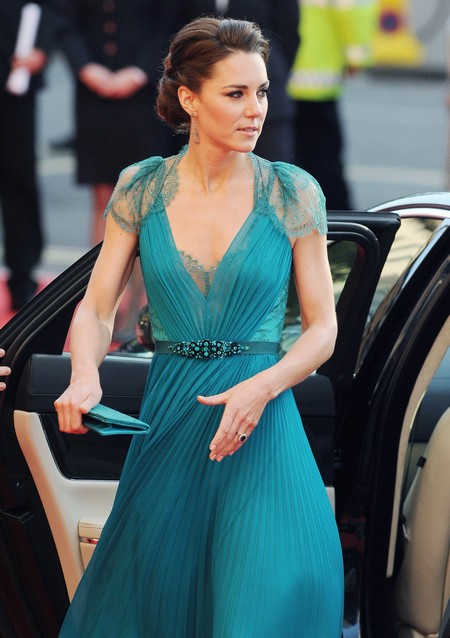 The Duchess of Cambridge is continuing to diet even though she is already thin.  This is what OK! reports that nutrition expert Bonnie Taub-Diz claims.  The hypothesis is that Kate is thrilled with the compliments she has been getting from the fashion world and therefore wants to be as thin as possible – at all costs.

Unfortunately Kate starving herself does not go along with Prince William’s stated desire to have children and form a family with Kate soon.  It is reported that doctors have advised Kate to gain weigh to improve her probability of conceiving.  So Kate sees that she faces a dilemma – put on the pounds and get pregnant or try to extend her reign as the royal fashion queen.

OK! reports: Thrilled by the compliments she’s received and the designers who have volunteered to dress her, Duchess Kate continues to diet, even though she has lost several dress sizes since she started dieting for her wedding. Yet, as the five-foot-ten royal’s weight has dipped below 90 pounds, those around her are concerned.

“She and Prince Williamhave made no secret that they want to have a baby — they’re hoping to make an announcement this year, while the queen is celebrating her diamond jubilee,” says the insider of the duchess and her husband, 29.

“Her doctors have advised her to gain weight to improve her chances of conceiving. Wills has been encouraging her to eat more, saying how he prefers her with a little meat on her bones!”

But Kate, 30, who reportedly weighed about 100 pounds at her wedding, is happy to have dropped more weight — more than 10 pounds according to nutrition expert Bonnie Taub-Diz, MA, RD, CDN of betterdieting.net, who does not work with the duchess.

“Like any woman, she wanted to lose weight for her wedding dress. The trouble is she’s just kept on dieting,” says the royal insider.

Kate probably never expected to be celebrated as a fashion star.  Now that she is being treated as one by the media, and with the fashion world playing along, Kate might just not be in a big rush to sport a big belly. Of course the thesis is speculative but not entirely off the wall. What do you think?  I am not an expert but Kate looks healthy to me. Let us know what you think in the comments below.