Kate Middleton Shops At The Grocery Store Just Like Us! (Photo) 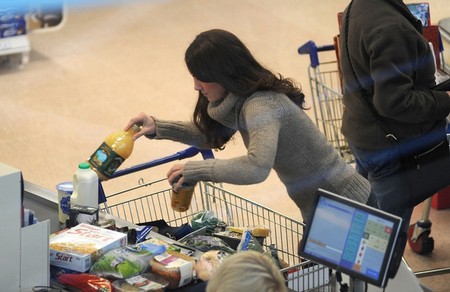 Kate Middleton is just like us, sometimes.  She was seen out and about running errands yesterday looking very casual and relaxed.  A witness told Us Weekly, “She went shopping at Waitrose supermarket and was carrying one bag full of groceries. Kate had her hair up in a ponytail and had no makeup on.”

Kate and Prince William celebrated their first anniversary on Sunday with a romantic night at home.  It has been quite a year for the romantic couple.  They’ve had numerous public appearances, have traveled to the United States together and then were separated for six weeks earlier this year.

After a whirlwind first year as a new royal, it’s no doubt that Kate likely still enjoys the simple things and that’s why she is known to run her own errands.  Last week she was seen shopping at Bicester Village, an Outlet Mall in Oxfordshire, which is about an hour and fifteen minutes from London.

“She had several bags with her, including one from Missoni,” said the source.

Kate is known to appreciate a bargain and even recycled one of her favorite Erdem dresses at her friend’s wedding Saturday.

Now that her usually busy schedule seems to have calmed down quite a bit, Kate is likely enjoying some quiet downtime at home in Anglesey, Wales.

What do you think of Kate’s style when running errands?  Should she be dressed a bit more formally? Or do you appreciate her natural and unpretentious manner?  Let us know in the comments