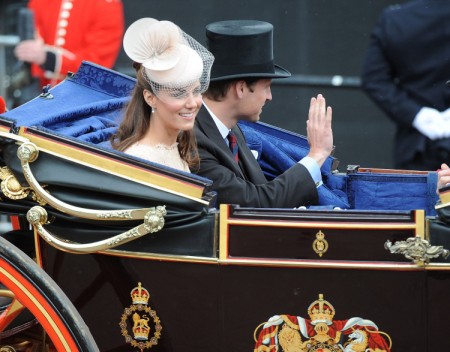 Don’t say Kate Middleton never did anything nice for you because she’s sticking with her high street favorites because she wants her people to be able to afford her fashionable looks. The Duchess is all about keeping her fashion icon status affordable from the fake drop earrings she rocked during the Queen’s Jubilee to the forever boring, yet highly wearable go-to nude, L.K. Bennett pumps she rocks on just about every occasion. Sources tell Now magazine it’s not just because Prince William is pinching the royal pocket books, rather Kate is keen to show that anyone can look like a princess on any budget.

“She feels she has a responsibility towards them,” a friend tells Now. “That’s one of the reasons why she buys so many of her clothes in chain stores such as Warehouse, Hobbs, Reiss and Zara.”

Perspective should be kept when it comes to these high street fashions. I don’t ordinarily consider a pair of $300 shoes and $200 dresses cheap. Target is cheap. A $200 Top Shop dress is not so much. However, when people are throwing Alexander McQueen fashions and diamond tiaras at you left and right I suppose you would think anything under $1,000 is a bargain.

I’m actually surprised and delighted that Kate thinks this way about fashion. Let’s face it, the chick would look amazing in a trash bag so she doesn’t need to spend millions to look presentable but the fact that she’s aware that others are following her lead is insightful and tells us a little more about this commoner. She wants to be accessible and knows that the easiest way for people to do that is through clothes. Kate’s $90 drop faux diamond earrings have already sold out from Heavenly Necklaces. They call is the “Kate Effect”. When Kate wears something, you can rest assure it will be sold out in hours. Sometimes Kate goes too far and gets it horribly wrong like the time she wore her mom’s old blue dress to her first speaking engagement. That fit badly and looked cheap. But you can’t get it right all the time. Kudos for trying.

Granted, even if Kate was wearing Versace every day all day, cheaper knock offs would be made to satisfy demand. That’s what happened with Princess Diana.

I have a feeling Kate doesn’t want there to be a clone army of women wearing cheap knock offs of her designer duds. Being an example is something that is new to Kate and she’s feeling her way through the new venture, but I like that she’s pragmatic. This is the new monarchy. Very soon, gone will be the days of Queen Elizabeth and her no interview policy. Instead we have young royalty who more accessible more normal, more with the times. Kate is helping usher in that new breath of fresh air. Do you like the effects? Do you think the monarchy will benefit from being more of the people or do you think that sensibility will dull it’s shine, becoming less of an enigma and lose its appeal?